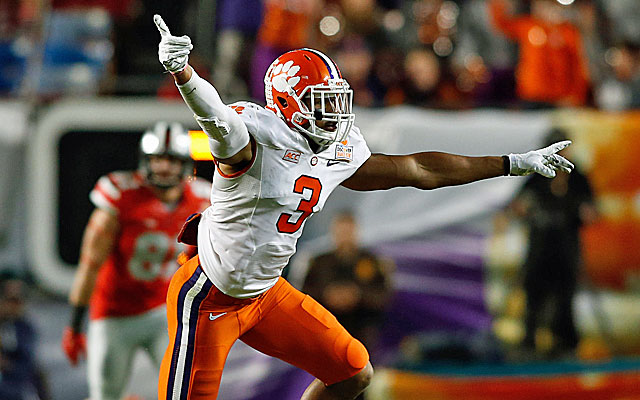 Will The Giants Select Vic Beasley?

You could hear this on statement on Thursday. In the 2015 NFL draft the New York Giants select with the #9 pick Vic Beasley DE/LB from Clemson.

Steve Spagnuolo gets a gift from the football Gods like Ben McAdoo did when the Gmen drafted Odell Beckham Jr last year. Jerry Reese watched Jameis Winston, Leonard Williams, Dante Fowler Jr, Amari Cooper, Brandon Schreff, Marcus Mariota, Kevin White and Bud Dupree come off the board like dominos. With the best defensive lineman (Williams), best DE(Fowler Jr), most physical/NFL ready Offensive lineman & the top two Wide receivers off the board it would make Beasley a no brainer at #9.

Vic Beasley would be a Day 1 starter at weak side Linebacker ala Von Miller/Bruce Irvin in Spags 4-3 defense, a three down player & an immediate upgrade in the Giants Front 7. He has elite athleticism & he is simply a defensive gamechanger who uses his elite speed, strength & leverage to wreck havoc in the backfield. He is athletic and physical enough to cover tight ends and running backs as a stand up linebacker on 1st & 2nd down. His strengths are playing with his hand in the dirt as a DE where he has shown great technique, use of elite speed, play recognition, great use of pass rush moves & leverage to beat college team’s best offensive lineman which Is usually the Left Tackle

Beasley was extremely productive in college and sticks out on tape plus he backed it up with an amazing combine. A healthy Beason with a young Kennard and Beasley would give the giants and athletic and physical linebacking corp while Ayers & Selvie battle it out for the open DE spot & Jenkins & Ellis battle it out to play next to Big Hank. A great run defense early on downs will keep opposing offenses in third and long situations where the giants can unleash their 4 DE rush package with Jpp/Ayers as DTs and Beasley/Moore as opposite Ends.

The biggest reason for drafting Beasley is that he brings something to the table that has been missing on the Giants defense for many years now which is the game changing plays such as the strip sack which Osi Umenyiora made a career out of and helped the Gmen win Two super bowl trophies. Vic Beasley would be insurance if Jpp decides to run for the money in 2016. The Giants can find a starting offensive lineman and a great offensive playmaker who returns kicks/punts in the 2nd and 3rd round but they won’t find a defensive player any where near Beasley’s caliber. If Vic Beasley falls to the Giants at #9 they must pull the trigger without thinking twice as he can make an impact on the defense like Odell Beckham Jr did for the offense in 2014. The New York Giants 29th ranked defense could use the help from the the combine warrior that disrupted plays in the opponents backfield like clockwork.