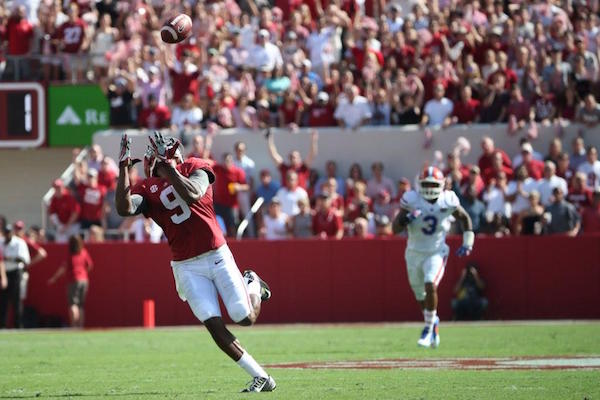 Holding the 9th overall pick in the NFL draft, the New York Giants will have many options when they are on the clock. Still, with many positions to fill such as safety, offensive lineman, and a pass rusher, Jerry Reese has always had the philosophy of taking the best player on the board.

It seems as though the Giants number one option would be to select offensive lineman Brandon Schreff from Iowa who has been regarded by many as the top player at his position. If Schreff is taken before the Giants pick, and Alabama wide receiver Amari Cooper is still available, would the Giants take him?

Going into the college football season, Cooper was regarded as the best wide receiver in the draft but has seen his stock fallen slightly due to the emergence of Kevin White from West Virginia.

While Cooper would add another tremendous deep threat option for Eli Manning, the Giants do not need to draft another receiver. The G-Men arguably have one of the deepest receiving corps in the league with Odell Beckham Jr., Victor Cruz, Ruben Randle, and Dwayne Harris. Although Cruz may not be 100% healthy, I doubt the Giants committed a lot of money for Dwayne Harris just to play special teams.

If I were Jerry Reese, I would concentrate more on the needs of this team rather than just going for the best player available. There are a plethora of good DL/LB such as Shane Ray from Missouri and Vic Beasley from Clemson.