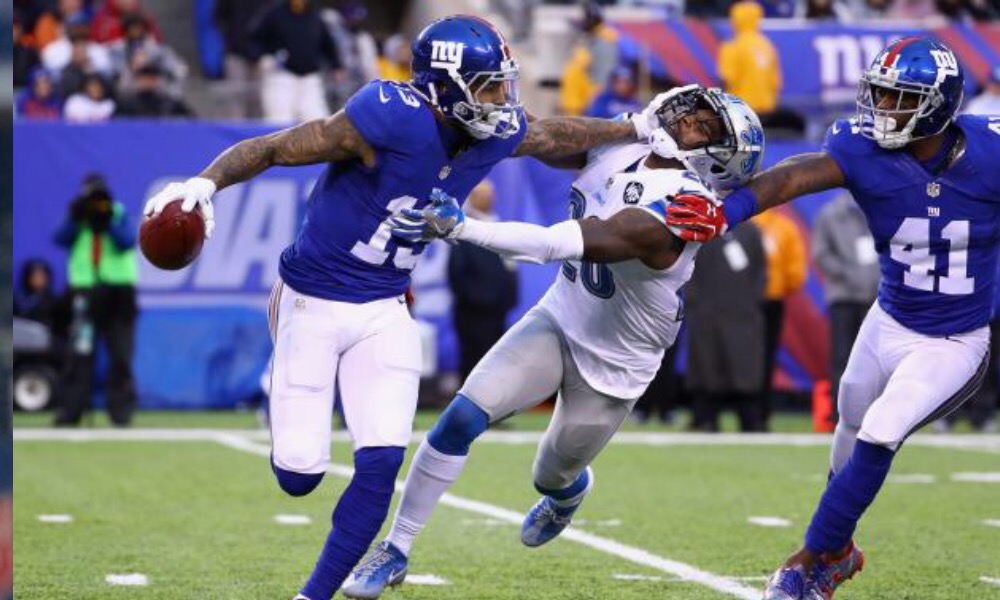 The Giants came into the game 9-4 with a 10-7 victory last week over their long time division rival Dallas Cowboys. This past Sunday they defeat the Detroit Lions 17-6.

Well how did Eli Do?
Manning started 11 for 11, the best start of his career before finishing the game 20/28 for 201 yards. He also added 2 touchdowns one to Sterling Shepard, and to Odell Beckham Jr. Manning ended with a final QB rating of 115.3.

Sunday also marked Justin Pugh’s return.
It was strongly felt he could help the rushing game. Carries were split between Paul Perkins, Shane Vereen and Rashad Jennings for a total 114 yards. Jennings and Perkins both had 25 carries to Vereen’s 14.

And what about Odell Beckham?
Odell  was targeted 8 times for 6 receptions netting 64 yards. To cap it off he added a clutch one handed (left) catch for the game winning touchdown.

Detroit Lions are now 9-5 after the loss to the New York Giants in rainy conditions at MetLife Stadium. The G-Men kept the Lions rushing game under check only allowing 56 yards on the ground, and 268 yard in the air.

The Giants held Matthew Stafford and company to a game with no touchdowns on the board, Something the Giants have done to opponents on 18 straight drives prior coming into the game. With a 10-4 record late in the season the Giants are looking for a play-off spot for the first time since 2011.

“New York Giants Take Down The Detroit Lions 17-6” was written by Guest blogger Troy Fraser Please leave feedback in the comment field below, I would love to know what you think.