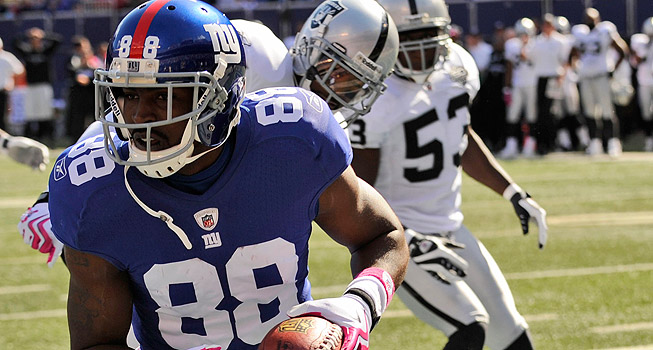 Do you have a Big Blue conscience?  Turns out I do.   He is whispering in  my ear, forcing me to look at this situation in a way that my eyes can not believe they are seeing.

He whispered to me on Monday night….”Holy shit dude, we have a shot…we are not out of it…do not give up hope…inspire it amongst the BIG BLUE sea of fans looking for a reason to believe.”

“You are suffering from “DeBLUEsions of Grandeur”.  What the hell does the Packers game have to do with us?  Looking for a reason to believe what?”

“You’re fucking kidding right?  To be nice about it, I don’t think it is possible,  These eyes have seen to much football, I see this team and see no light at the end of the tunnel.  I look at our record and see too big a mountain to climb.  To daunting a task lies ahead.”

“Your eyes?…Uuuuh…you forget dick, your eyes are my eyes.  And this is far fetched and not worth our time. Weren’t you there when we were trying to trade for AP in our fantasy league today?…We should be focused on that right now.”

“That’s not cool dude.  If you really want to have this conversation…let’s go.  It will be quick.  But first, what do you mean what a douche I’ve become?  Explain yourself inner Big Blue conscience…”

“You don’t want to hear it, you are blind to the Big Blue light.  You have lost your way”

“Fine, here goes nothing.  For once in your life don’t speak, listen.  Remember all those years back?  When you were younger.  Remember the 1st 2 Super Bowls?  Remember the kid who would paint his face when the Giants played on Monday Night Football?   He would run down the hall and greet his father with an LT like tackle when he got off the elevator after a long day at the office. Remember the day you realized you were different from the other kids?  Super Bowl 21, while all your friends lost interest and were messing around during the game, your 9 year old eyes were fixated on the game.  Not missing one throw Phil Simms made, God bless his good name. Remember starving for two days because we couldn’t eat after Flipper Anderson, that son of a bitch, ran away with our Super Bowl dreams in 1989?   Remember in 1990?  None of you’re friends thought the Giants had a chance against the 49ers and the Bills that year.  You painted the picture with a Big Blue brush, intelligently making a case why the Giants had a chance.  Why our friends should cheer…why they should have hope.  During the years that followed those two Super Bowls were some of the toughest of your Fanhood, and yet you still saw the positive.  You were the one that always had hope from the beginning of each year until they were mathematically eliminated.  From Dave Brown to Kerry Collins we always believed until the season was over.  Even as recently back as 2007 you were different.  When we lived in Va Beach we were surrounded by Redskins fans…Cowboys fans…Packers fans and you still maintained steadfast in our belief that it’s a marathon, not a sprint. An ugly win is a win no less, you don’t give them back.  That we always had a chance.  We are never out if it.  It was that swagger that made even the Cowboys fans where you worked laugh after the NFC Divisional game that year.  When you brought in popcorn for all the Cowboys fans since they had told you to “get your popcorn ready” like that douche T.O. used to say.  It was your confidence and belief that saw a way to beat the Patriots and had everyone saying ‘damn, you called it” after they shocked the world.  It was your passion that gave you the memory of your two daughters tackling you after Super Bowl 42.  It meant a lot to them, because it meant a lot to you asshole.  Don’t you get it?  Somewhere between then and now you have lost that passion, that belief.  You have grown content and it makes me sick. You live off of the ghosts of Super Bowls past, and make excuses for what is in the present.  You’re ok with being 2-6 because it might get you Jedeveon Clowney, because Coach Coughlin is 67 and this may be the way to start rebuilding, because we should appreciate how hard it is to win one Super Bowl, never mind 2 in 6 years.  But here is what I don’t get…If it’s ok for this to happen now, why wasn’t it ok in 1991…1992…1993…1994 and so on when we had won 2 Super Bowls in a 4 year span between 1986 and 1990.  You are a hypocrite.  For years you’ve been shouting loud from the top of mountains for everyone to hear about the Giants, and now when you finally have a voice,  you have lost it…this team ain’t dead, you are.  Now can you take a sip of that delicious frosty beverage…I’m parched.”

I let my Big Blue Conscience’s words marinate a second.  Was he right?  Did he have a point  I took a swig of my frosty ale and thought for a second.  Then, I resisted.

“You know what…this is bullshit.  I know what I saw the last two games.  And despite 2 wins, we looked horrible. They don’t have a chance to comeback from this.  Tell me what light have I yet to see?  What is this way you speak of?  Where in this abyss of bad football do you see hope?”

“I can not tell you James.  For soon you shall see the light, and when you do it shall be glorious.”

“Oh James, before you go…let me ask you two things.  One, who do we play in 2 weeks?  And two, If the Cowboys were 7-2 right now and the Giants were 4-4 with the same remaining schedule…all things being the same except for their records, would you feel different about things?  Good night.”

I paid his words no mind again for the remainder of the evening.   Two days passed and not a word was spoken by my Big Blue conscience.  I had chalked it up as one to many frosty beverages and sat down quite happily to enjoy some Thursday Night football.  I was under no influence of alcohol when it happened.  But it happened none the less, and it was as glorious as I was told it would be.

It started quite innocently…

“The Redskins are going to lose this game James…and the Eagles and Cowboys are in tough spots on Sunday as well.  Do you see the Big Blue light yet James?”

What did he mean the other night?  Why did he ask who we play in 2 weeks?  I know we play the Packers at home.  And what was that shit about the records?  If the Cowboys were 7-2 right now and we were 4-4 right now with the same remaining schedules…so what?

Then it hit me…It was right around the time the Redskins watched the game against the Vikings slip through Santana Moss’s hand.  The light was Big…and Blue and my friends…it was glorious.

It started as simple as a thought…and snowballed into an actual rationale possibility.

We are not dead.  This season is not lost.  I now know why my Big Blue conscience tested me…there are a lot of if’s, maybe’s and needs in this scenario, but it gives us hope.  It gives us a reason to believe…

CHEER FOR THE SAINTS — Cowboys 5-5

Next week the Cowboys are on a bye week.

BEAT THE PACKERS — No Aaron Rodgers, not a gimmie at all, but winning is a lot more realistic now.  Giants 4-6

It can happen.  It will happen.  Our season starts Sunday.

“But what about the Redskins and the Eagles Big Blue Conscience?”

“Answer that yourself…look deeper into the Big Blue light.”

“Of course…the Redskins are 3-6 and have already lost this week.  They go to Philly and then at home against the 49ers…”

“Even if they somehow win both of those games they are 5-6..and the Eagles…the Eagles just don’t matter at all…ever.”

“Correct James, and who do we play after the Cowboys?”

“Speak the words…let me hear you say it…”

“This season is just getting started.  One month.  4 games to turn it all around.  This defense has been solid of late and has stopped some pretty good running backs along the way.  JPP declared he’s 90% percent healed from the back surgery now and promises to get out of his head and start flying around like the JPP of old.  A healthy pissed off JPP is enough to make a huge difference by itself.  Add that to fact that Antrel Rolle has the defense motivated, confident and playing with a swagger again and this defense is the only one in the NFC East with the potential to impose its will.  Better late then ever.  It starts Sunday.”

“Is due.  They are to good to be this bad.  Having running backs like Hillis, Jacobs and now getting Andre Brown back will give them a power running game.  Three backs who can give you 3 yards and a cloud of dust…three backs that can get Eli into 3rd and shorts and give the offense a physical presence.  And that will help our three wide receivers take this offense to another level.  If Eli plays best in money games, then he should kill the 2nd half the season, cause each of these games are playoff games now.”

“Did you just say playoffs?”

“Bet your sexy ass I did Big Blue Conscience, I see the way.  It won’t be easy, but nothing worth winning should be.  We are the underdogs once again.  It is once again us against the world.  We are a after thought now when discussing this division…they have left for dead.  But what they forgot was that champions do not go gently into to that good night…we rage…rage against the dying of the light.

NOW IM REALLY FIRED THE FUCK UP!!!!!  LETS GO!!!  WE ARE GONNA PASS THIS TEST…WE ARE THE NEW YORK FOOTBALL GIANTS AND WE DON’T TAKE SHIT FROM NOBODY!!!

They left the door open for us, and now it’s time to kick it off the hinges.  They had their feet on our throat, but they couldn’t take that last gasp of air….we are breathing Bleed Big Bluers.  Let the air flow into your lungs…catch your breath…and shout this Sunday for the heavens to hear.

This will not be easy, if you are going to the games make that building rock for the next week 3 weeks.  Make it louder than it’s been all season.

One month to erase the past and make the season what we all thought it could be.  One mistake…one loss…one play can end it in a hurry.  But we have seen these Giants with their backs against the wall before.  We have seen them been told no, you can’t do it.  And we have seen them make others eat their words time and time again.

Take it Giants…make them pay for not burying us when they had a chance.  One month to make it all right in the Big Blue world.  You can do it…we believe you can and we are with you.

“Welcome back James,  I’ve missed you.”

“You had me at douche Big Blue Conscience…and thank you.  Now let’s have a frosty ale and get ready for Da Raiders…”

“DeBLUEsions of grandeur” no more…