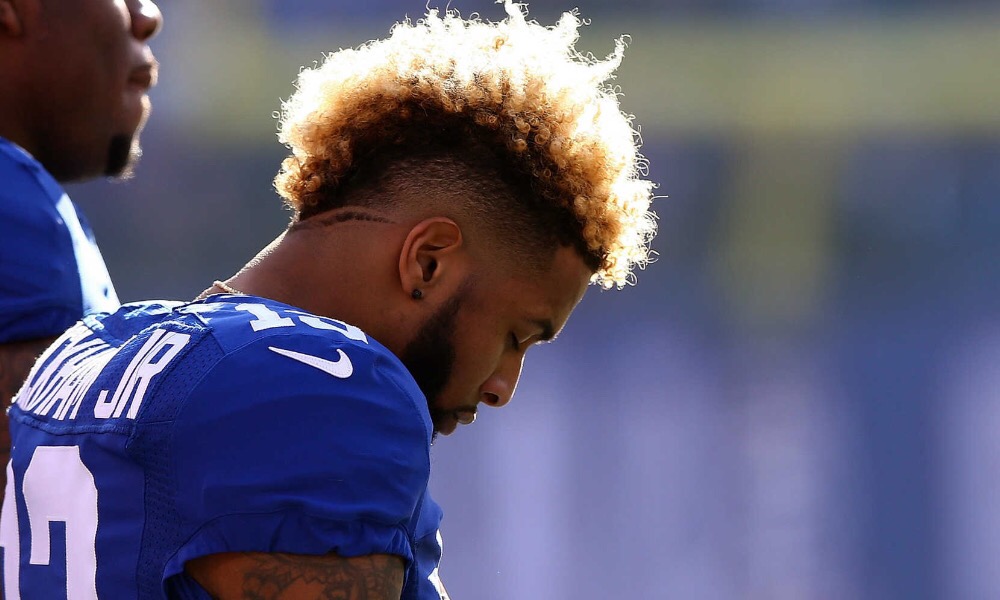 I went to Boston this past weekend with my wife. A New York Giants fan trapped in the land of Patriots. I spent a decent portion of my weekend shouting “Go Eli!” or “18-1!” as pedestrians passed me by in their Brady shirtzees. It was a big weekend for Bostonians. Their prodigal son was returning home, his first game at Foxborough since he had been suspended for improperly deflating footballs.

The streets were full of Brady supporters, exuberantly celebrating the return of Trump’s BFF. Tom Terrific is their fearless leader. He provides their path to victory. They love him.

I sat down for some gelato with my wife and scoured my phone for an update on my team.

4:14 pm: Still waiting for the app to update with the results on the play, a text comes through from my Mom. It simply reads, “Odell!!!!!”

I immediately start clapping and hollering. I already know what the app would take another minute to tell me.

Later that evening, I’d see the highlight. I’d hear the sound of MetLife Stadium erupting as soon as OBJ hauled in that slant, much less took it 66-yards to the house. The home crowd knew: Odell Beckham had put his cape on.

As a displaced Giants fan in the heart of Eagles country, when people want to talk Gmen they come to me. Due to my geography, the locals are a lot bolder when we’re losing, or when they want to rib me about something. The first questions I got accustomed to answering were on “Bad Boy” Jeremy Shockey. Inquiring minds always wanted to know how I could root for someone so brash? Didn’t I hate when he would celebrate a single catch, or when he would shout at the top of his lungs at a teammate?

I was never shy about my appreciation for Shockey. I’m a New Yorker in my heart of hearts. I love emotion, I thrive off it. I understood Shockey. I had met him at an event in my early 20s. He couldn’t have been nicer to me and my family, signing a jersey, and taking 5 minutes to chat with us. I’ll be a fan of Shockey’s for life.

The next popular question had to do with Eli Manning. Didn’t I ever wish he was Peyton? What’s it like to root for the creator of the Eli Face? The younger Manning’s clutch gene was always recognizable, and once his championship pedigree displayed itself, those discussions became elementary. Two titles with Eli is something Eagles’ fans covet beyond measure.

When Plaxico Burress shot a hole in his thigh while we were 11-1 in 2008, and well on our way to back-to back Super Bowl rings, everyone laughed at our misfortune. While Plax’s stupidity is undeniable, and the anger and disappointment I felt toward him for ruining our shot at history is real, Plax definitely was paying for his self-inflicted wound. I certainly won’t pile on, beyond to say I hope he thinks it was worth it.

Today, when I tell people I’m a Giants fan, Odell Beckham questions aren’t far behind. People want to know if I think he’s overemotional? Too in-love with fame? Is he dating a Kardashian? What if leaves The Giants for Los Angeles when he’s a free agent? Then the 2016 season started.

OBJ’s season started out respectable enough. The Giants won two games, albeit while Beckham was quiet by his own standards. The Josh Norman rematch was quite the firework show. Filled with tears, sideline outbursts, and battles with kicking nets that sparked so many Mortal Kombat memes, I felt like the Flux Capacitor and Doc Brown had transported me back to 1995. When the dust settled, OBJ had 7 catches for 121 yards. #13 proved that he can only be stopped by #13.

Back-to-back embarrassing losses to Minnesota and Green Bay, which saw OBJ collect personal foul penalties, wax poetic about how he wished he was having more fun, and collect his first garbage time touchdown were next. All the media could talk about was how OBJ might be a distraction, more trouble than he’s worth. Rookie head coach Ben McAdoo even gave the media few soundbites about the distraction that is Beckham, before saying that he and the franchise have their star’s back in an interview with the wonder that is Francesca.

After his game-winning, season-saving, soul-stealing performance Sunday (detailed above), OBJ removed his helmet on the field (despite being out-of-bounds) and sprinted back to the kicking net for a mock proposal, cementing a 15-yard penalty that did not prevent the Giants from winning.

More questions. When will OBJ mature? His antics WILL cost this team one day, are the Giants and their fans at peace with that? Is he aware that he’s driving that kicking net joke into the ground? (Ok, my wife asked that one, and thinks he totally is)

My answer to those questions is simple. Did you watch the game Sunday? It is glaringly obvious that if Odell Beckham hadn’t put his cape on, we probably wouldn’t have a season to worry about. The truth of the matter is that without Odell Beckham Jr, we’d probably be 0-6. I remember what 2013 felt like. 0-6 is not fun. (Coincidentally, it did get us OBJ, but that’s a different discussion)

OBJ is our offense. The running game has been non-existent since Week 2. Eli’s looked jittery at times, and has appeared to be disconnected with his receivers not named OBJ. The reason we beat the Ravens Sunday is because Odell Beckham is a playmaker. He’s a superhuman talent, the likes of which we’ve seen once before. Just like Lawrence Taylor could change the result of a game by winning on one down, Odell Beckham can do the same. As long as he maintains that level of talent, and holds our chances to win in his hands on weekly basis, we’ve got to buckle-up and enjoy the ride.

If the national media wants to discuss Odell’s potential as a distraction, let’s talk about it. Are we supposed to believe that the emotion that Odell Beckham plays with, the emotion rooted in his desire to win, and succeed at the highest level, is a distraction? Can we give our 2-time Super Bowl MVP the benefit of the doubt in being able to handle the personalities of his teammates?

This season has been a frustration for Odell. Sunday was a great release. And I’m supposed to be concerned Odell wants to hug a kicking net? The kicker who uses that net is an admitted spousal abuser. That’s the distraction! OBJ plays with the joy, fervor, and kinetic energy that I want in players that I root for. He got caught up in a moment. That’s ok with me. It’s likeable.

After the game Odell deflected credit to Eli Manning saying, “First of all, Eli changed the play. He had a play on and saw some different coverages that you can’t mess with. He changed the play and put me in a perfect position to run a slant. I catch it and see one safety angling to the right. I know that for someone to be able to open their hips and run at the same time to run me down, they’re going to be very fast. I went left and it all worked out.”

Odell Beckham is worth rooting for. He plays the game in a way that is easy to relate to. He isn’t afraid to be transparent, and to be who he is. He’s a New York Football Giant. He is our guy. His talent is unique and complete. He can single handedly erase errors from the likes of Larry Donnell who inexplicably step out of bounds 1-yard short of the sticks rather than turn the ball upfield. In the process he saved our season.

Tom Brady returned home to the loyalty and support of an appreciative fan base. Loyalty and support he richly deserves. The Giants fan base should offer the same levels of love and appreciation for Odell Beckham. He is one in a long line of Giants we can be proud is part of our historic franchise.