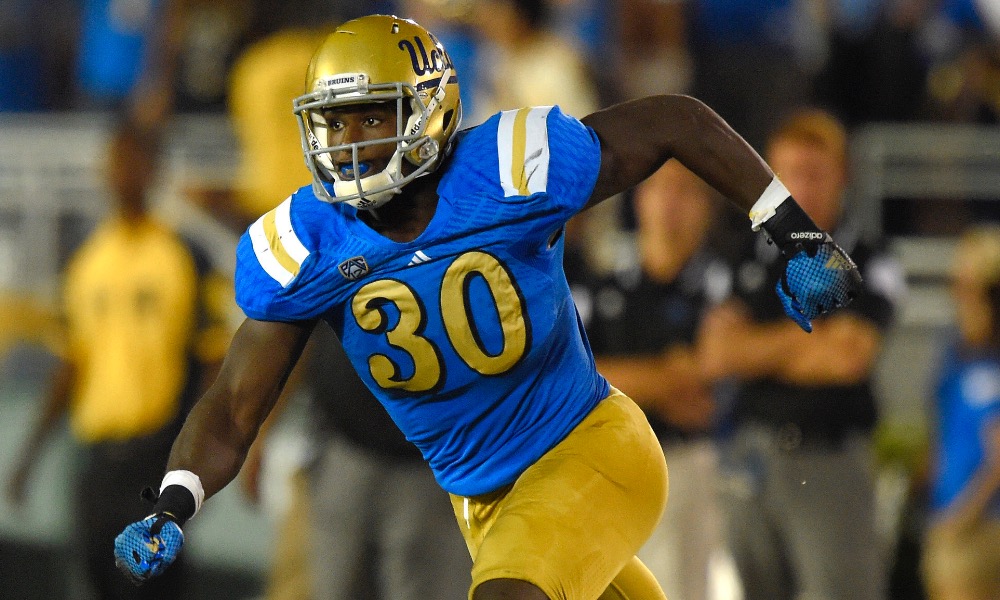 Players to Watch Out for the Giants to Draft if they were to Trade Up or Down.

As the NFL Offseason moves along, the next hyped-up event after the Super Bowl and Free Agency is always the NFL Draft. The most elite of college football meet in Chicago’s Auditorium Theatre where they wait to hear their name be called by the commissioner on center stage. This year, the New York Giants hold the 10th pick in the NFL Draft, as well as the 40th, 71st, 109th, 149th, and the 184th picks. But the most frequently asked questions by Giants fans at this time of year are, “Who should the Giants draft [with their 1st round choice]? Should they trade up? Should they trade down?” Usually there is a solid, strongly opinionated answer in which the Giants should trade down or that they should stick at their pick. But with a very deep draft class that has transcendent talents in positions that fit their needs, there are many viable options if Jerry Reese were to trade up or down.

Here are three possible options for the Giants if they were to trade up:

Myles Jack is the best linebacker in this draft, and the Giants have a gaping hole in their linebacker corps. Despite knee surgery that sidelined him for most of UCLA’s 2015 season, he has shown his transcendent athleticism and versatility through his play at the running back position. He would be a great fit for Spagnuolo’s defense because in the NFC East, there are three top-notch tight ends in Philadelphia’s Zach Ertz, Washington’s Jordan Reed, and Dallas’ Jason Witten. Jack, in college, could lock down a tight end 30 yards downfield, which helps the Giants need at that position even more. They would have to give up their own first rounder and possibly their second rounder, but Jack is worth risking for the biscuit.

Yes, the Giants did really vamp up their defensive line in the offseason, but it is still a need to draft another one for their front to really succeed. Giants DC Steve Spagnuolo loves to rotate defensive linemen in and out to conserve their energy throughout four quarters, and a set of elite pass rushers is needed. When he was the DC for the Giants 2007 Super Bowl XLII winning season, he had a three-headed monster in Michael Strahan, Osi Umenyiora, and Justin Tuck. With bringing in Buckner, this only helps the rebirth of the big three pass rushers. Like Jack, a first rounder and a second rounder would probably have to be given up.

Similar to the reason to draft Buckner, the way that the Giants have succeeded in the past is with a stellar pass rush. Bosa was one of the premier pass rushers in the FBS over his years in Columbus, and is certainly one of THE guys on the top of the Giants’ draft board. Plus, Jason Pierre-Paul’s contract is only a one year deal, so it is a must need hole to fill if the Giants were to let him walk next season. Similar to Jack and Buckner, it will probably take a first and second rounder to trade up for Bosa.

Here are three possible options for the Giants if they were to trade down:

Ragland, coming from a Nick Saban coached Alabama team, is one of the most pro-ready players in this draft. He was the signal caller for the Crimson Tide throughout this past 2015 season which lead to their 2016 College Football Playoff National Championship game win over Clemson. Ragland will serve as a viable option for the future of our linebacker corps. By trading back and drafting him later, we could maybe gain a first round pick for next year if we’re lucky, but will definitely receive a second rounder for this year’s draft.

Like Ragland, Darron Lee was the play caller for a defense that won the College Football Playoff National Championship game win over the Oregon Ducks just a year before in the 2015 College Football Playoff. Lee is a great athlete and has the ability to develop into a safety or to stay as a linebacker. He will be a great player for the Giants to draft because he can help our linebacker corps and possibly be a viable option opposite Landon Collins. The Giants will probably receive a second rounder or a third rounder in exchange for the tenth pick and the pick we would possibly select Lee with.

Laquon Treadwell put up a show against the Oklahoma State Cowboys in the Sugar Bowl on New Year’s Day, showing various strengths for him to possibly be a top-5 pick. Since the combine, his stock has only decreased. He bypassed the 40-yard dash at the NFL Scouting Combine in February, but has ran one at his Pro Day. He showed a not-so-flashy 4.6 second 40-yard dash at the Pro Day. Though speed is an issue, he is a great option opposite Odell Beckham Jr. and would be for many years to come if he was to be drafted by the Giants. He is the best receiver in this draft class, but his grade is only equal to a mid-first round draft pick. The Giants could give up their 10th pick in exchange for a mid-first rounder and maybe a third and fourth rounder along with the pick they would draft Treadwell with.