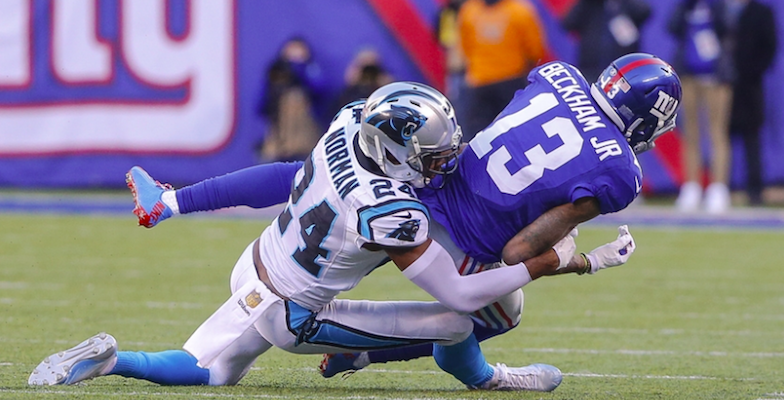 Carolina Panthers kicker Graham Gano nailed of 43 yard field gold with seconds winding down to seal the game for the Panthers 38-35 over the New York Giants and improving their record to a perfect 14-0.

The Five takeaways from the Giants vs. The Panthers

Let’s begin with the facts that we are all aware of: the Giants made a frantic comeback from 35-7 to tie it up with minutes left in the final quarter. Odell Beckham Jr. Created his own story, resulting in a 1 game suspension. No need to discuss these two topics here the tabloids, talk radio and sports channels will cover these them until they are blue in the face.

So where does that leave us? Sunday’s game was a microcosm of the entire Giants season. Not only are the 5 takeaways as a result of this week…they have been the 5 glaring takeaways from the Big Blue season.

1. Defense
Again Big Blue cannot make the necessary “big” stop. From the season opener in Dallas, to the game against undefeated New England and followed up by the disaster against the Jets the Giants defense melts into a blue streak at the end. Teams go down the field in 4, 5 or 6 plays for winning or tying score. You can blame coaching, injuries (like Beason), scheme, but at the end of the day it is the players fault. No excuses. Period.

2. Running back by committee
Does not work. I have written before Jennings, Darkwa, Vereen and Williams have all shown flashes of becoming the feature running back. Yet, week after week, we never have an answer. Shane Vereen has too much talent to have handled the ball as little as he did this year. If nothing else he should have been a “slot receiver” on this offense. Jennings seems to get going- then he doesn’t get a carry for entire quarters. Darkwa has had few opportunities (Dallas at home) but then disappears like he is in the witness protection program. Williams has one good run, then gets stuffed at the line for the next three rushes. So in the end who do you blame? I go with the Offensive Coordinator- McAdoo. He should have chosen one (in my opinion, Jennings) and “ran” with it.

3. Consistently inconsistent
I can’t imagine a team that has been more frustrating to watch than the G-men. Dropped passes, costly turnovers and mind boggling plays have occurred all season and the Carolina game was no different. ODB has to catch the ball from Eli in the 1st Jennings fumble at the end of the half was a costly game changer. Then Rodgers-Cromartie drops a sure fire pick-6. Finally, Nicks tripping over the goal line leading to an interception in the end zone. (I realize Carolina fumbled on the following series, but events like that are too rare to consider.) These are signs of a bad team.

4. Coaching
I have said it before, I am a HUGE Tom Coughlin fan. Yet, all good things must come to an end. Gen. Coughlin allowing ODB to continue to play after 3 personal fouls was a clear sign of a coach trying to save his job. In the past Gen. Coughlin would have benched ODB in a heartbeat. Or at least blasted him on the way back to the bench (see Plaxico 2008). If it is the end for Gen. Coughlin on the Big Blue sideline hopefully the Giants, can find a nice way to for him to “fade away”-retirement or another position in the organization.

5. Eli Manning
Eli has been the model for the Giants for 10 years. He is steady, calm and continues to be a master of leading the Giants down the field. Time and time again, he stands there and makes the passes that have to be thrown. Even with a depleted offensive line that has seen numerous starters go down to injury. Does he make mistakes? – Yes- but remember he is throwing the ball 25-35 times a game. Interceptions are going to happen. Especially since, the Giants all too often have been forced to go strictly with the passing game (see reasons 1-3 above).
The Good- Not quitting after being down 35-7.