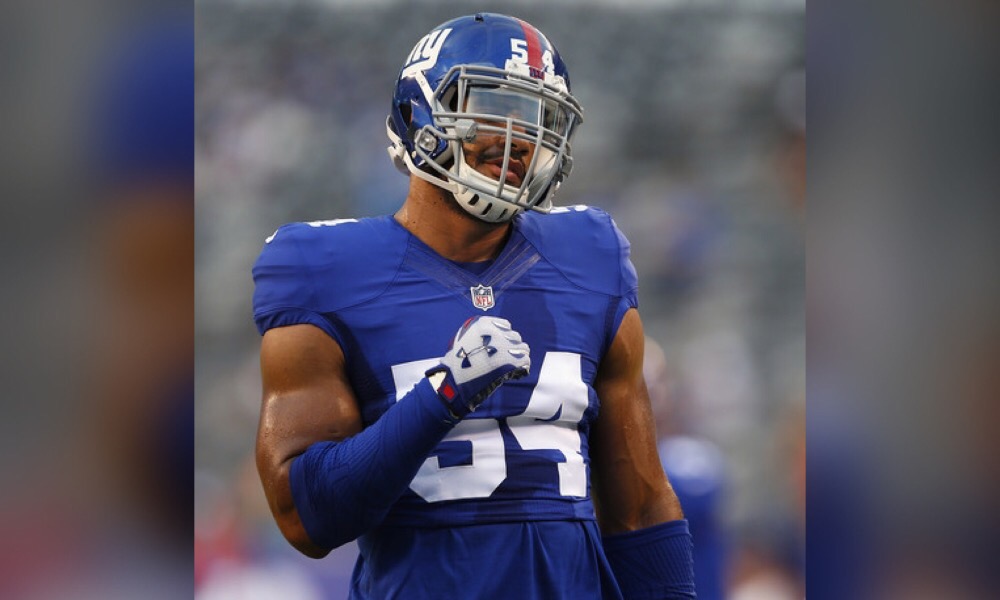 I clearly remember when I fell in love with the New York Football Giants. A 6-year old boy, living with his grandpa in West Sayville, New York.”These are the New York Giants, and this is who we root for in this house,” he told me as he stuck in a tape of the 1986 Super Bowl.

I was hooked. Lawrence Taylor, Harry Carson, and George Martin running around the area, imposing their will on the gridiron, allowing Phil Simms to complete 88% of his passes that day, taking that first iconic trip to Disney Land.

Leonard Marshall squared his helmet between the shoulder blades of two-time defending Super Bowl Champion Joe Montana, and LT ripped the ball aside from Roger Craig. Matt Bahr kicked his 5th field goal of the day, propelling the Giants to Super Bowl XXV.

O.J. Anderson and company would hold onto the ball for 40+ minutes, setting the stage for our second Super Bowl victory, with a little help from Scott Norwood, and the football gods.

The love for The New York Football Giants that my grandfather passed down to me centered around a larger-than-life defense, filled with playmakers who could impose their will on football’s biggest stages.

Before Michael Strahan was hosting game shows and palling around with Kelly Ripa, he was The Giants emotional leader in taking down Tom Brady and the previously perfect Patriots. Super Bowl XLII also served as the coming out party for Justin Tuck, who sacked Tom Terrific twice that day, setting the stage for Eli, David Tyree, and the helmet-catch heard ‘round the world.

2015’s version of The Big Blue wrecking crew was an embarrassment, quite frankly. Not just in Giants history, but in the history of the league. Steve Spagnuolo’s unit was legendarily porous; surrendering 6.1 yards per play, and 6,027 yards by year’s end (that’s the most yards yielded by any team, ever).

A storied pass-rush that buoyed past championship runs garnered 23 sacks in 16 games, largely because their leader going into the 2015 campaign failed to hold opposing quarterbacks in his grasp as a result of choosing to grab fireworks with his bare hand the previous 4th of July.

After giving up 27 or more points in half the team’s games, and squandering a 49-point offensive output against the New Orleans Saints, the message for Jerry Reese and company was clear and distinct. The defense was devoid of talent. The storied defense that had led us to four Super Bowl talents was defunct, and drastic measures needed to be taken.

Coach Coughlin was jettisoned, and the defense was the beneficiary of $100+ MILLION injection of talent. The goal? Create a new defense in the image of the Patriot slaying squads detailed above. A defense with a clear objective. Destroy opposing quarterbacks. Olivier Vernon garnered $85 million following a 7.5 sack output in 2015. He had 2.5 sacks against the Ravens in December, 2 weeks after going toe-to-toe with his new division rival Tyrod Smith of the Cowboys, registering 1 sack, and making the All-Pro work all afternoon.

Damon “Snacks” Harrison traded a green uniform for a blue one when he made the move across MetLife Stadium to the tune of $46.5 million. Spending his career in a 3-4 defense, Snacks has a reputation as the league’s premiere run-stopper (with only 1.5 career sacks).

JPP pledges to play 2016 without “The Club” on his mutilated hand, which should allow him to finish more of the hurries he creates with drive-ending sacks. We’ll see….

The talent upgrade on the front-line is undeniable. The question on every Giants fan’s mind is can they produce in the clutch? Can they give Cousins, Romo, and company the nightmares that their counterparts from yesteryear built championship pedigrees upon? The potential is apparent.

Reese and Company have harkened back to 2007 with one other key defensive unit as well. The secondary. Welcome Janoris Jenkins and Leon Hall. Veteran ball hawks, who’s aggressiveness will compliment a dominant pass-rush most effectively. They remind me of Sam Madison and R.W. McQuarters, playmaking corners who came up largest during the playoff run of 2007. Throw in 3rd Round draft choice Darian Thompson, who broke Eric Weddle’s career interception record for the Big West Conference, and 1st Round selection Eli Apple, and the hope is the secondary will create more turnovers than we’ve seen in the recent past, ultimately taking a few to the house!

Giants fans should be encouraged that the front office has a game plan. They’re drawing upon the blueprint of past success to help Eli reclaim his rightful place, atop the Manning Family Super Bowl Championship list. Eli’s proven that he can maximize his receiver’s production (see Manningham, Mario; Smith, Steve; and Cruz, Victor). I can’t wait to see what he does with Sterling Shepard and Odell Beckham. Pair this offense with a respectable defense, and an NFC East title is within the realm of possibilities. And all Giants fans know what Eli does in the playoffs…

That six-year old boy who fell in love with the Giants? He’s 33 now. And he knows that the Gmen win with defense first. I’m intrigued by the prospect of the defense returning to a level that Taylor, Carson, Banks, Strahan, and Tuck can be proud of.