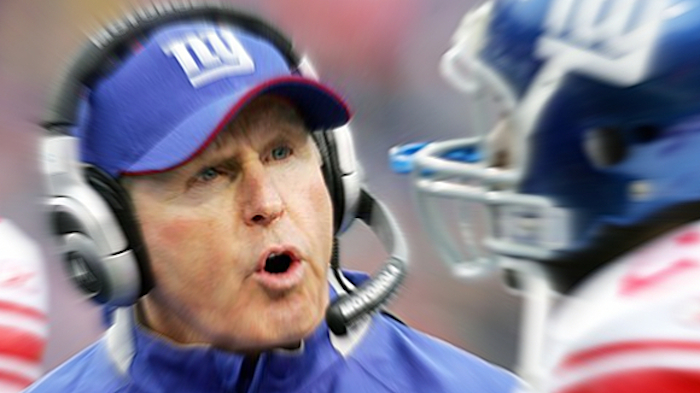 Do you remember that Bleed Big Bluers? I do. That battle cry of 2007. How quickly we forget huh?
The Giants forgot who they were last week and then, they got what they deserved. It pains me to say it, but the truth hurts sometimes. HUMBLE PIE ALA MODE….

It started with JPP, continued with Terrell Thomas and ended with Antrel Rolle covering Dez Bryant. It was ours for the taking, and then we gave it back. It was Victor Cruz letting go of the ball. It was 2 trips inside the 5 yard line that ended with chip shot field goals instead of touchdowns . It was a defense that played well all day until it mattered most. It was losing the turnover battle, again. It was giving up another TD…on offense. It was a tease, much like the four game winning streak was. A figment of our imagination that this team ever had a shot.

I bought in because I have seen them do this before. And then it happened….

was in the library typing “Sunday Bloody Sunday“. My computer took a shit weeks ago and Ive been forced to write at the library at times since. I don’t mind it really, it gets me out of the house, it’s tranquil and some of the librarians are hot…so its a win win. Well I was quietly going about my business, typing away…you can hear a pin drop. Then I notice my phone light up. Since I was monitoring the Julius Thomas knee injury before the Broncos-Patriots game for fantasy football purposes, I immediately picked it up.

That was when I first saw it….

I swear on all that is Holy Bleed Big Bluers — the silence in the library was broken abruptly when I let out a very annoyed, very loud, “FUCK!”…

A older gentlemen looked at my curiously…I looked right back at him and said…”It’s my ex…a real pleasure ya know?”

The man looked back, laughed and said …”I understand…I got two of those…sounds like you got off easy”

The Giants drank their own Kool-Aid after beating four nobody quarterbacks. Did the Giants really meet the Cowboys at midfield during pregame warm-ups? Who the hell are these guys? This whole season has been sent from a galaxy far, far, far away. From the countdown clock to the Super Bowl being displayed in the Giants locker room, to Hakeem Nicks becoming a Diva instead of the beast wide receiver we have come to love. The turnovers, the wrong routes, the play-calling on offense and defense. The lack of a pass rush…this entire season is a lost cause. Reese put them on notice in August and they have pretty much spit right back in his face this season. This team seems like it’s gone Jim Fassel on us again…guys seem way to comfortable. They embarrased us all on Sunday. More then the blow out loss to the Panthers…which seems legit now. More then all the sacks they gave up in Kansas City. More than the six turnovers on opening night. Sunday was the worst of them all. Why?

Well, One…It was the Cowboys, for the right to make this last month mean something. To turn around all that they screwed up earlier this season. To right the wrongs they made. To provide hope to a fan base that supports them through thick and thin. It was the division…the play-offs and a chance to make a run with the core group of guys that were cheered twice before as they were ushered in a sea of Big Blue fans down the Canyon of Heroes.

Two — How it happend. Talk is cheap play the game. What gave the Giants the right to talk at all? They were 4-6 before kick-off and through 11 weeks of the season had not put one single full 60 minute game on their resume this season. They were mediocre to say the least, but we have seen teams mired in mediocracy at this point of the season get hot at the right time and end up with the Lombardi trophy. We had a chance. Then we turned into Big Blue Bullies and stuck our foots in our Big Blue mouths.

Guarantees? Trying to punk a team out at midfield before kick-off? Are we the University of Miami all of a sudden?

There was the old ball coach, Tom Coughlin, waving his hands in frustration on the sideline. Fighting with all he had, and there was Hakeem Nicks smiling in back of him dressed in street clothes on the bench. Hearing Coughlin after the game and on the following Monday, he sounded old for the 1st time in a decade. Like he was worn down. Like he had no answers for what had happened and no clue on how to fix it. He sounded like it was over…

The Coyboys came to the MetLife and fought hard for 60 minutes…we thought we can punk them 3 days before the game and intimidate them right before kick-off. We were wrong. The Giants turned into the Cowboys last week and last Sunday. The Cowboys handled themselves before and after the game like we used to. When we were hungry. When we were the hunters. Now all we are is a punchline.

A: ‘Talk is cheap, play the game’ is my policy and I, quite frankly, was unaware of the two that were made and people made a big deal about that. I don’t

believe in that stuff. I think you play the game. Talk is cheap. Play the game. I don’t see anything that gets accomplished by the verbalization part of it. We’ve never been a team that has been one to provide bulletin board material. I understand there was a little bit of that last week and I don’t believe in any of that. As a matter of fact, I speak out very strongly against it.”

The inmates are now running the asylum. How don’t you know your team is talking? How weren’t they told during the week not to talk? What is the hell is going on with the Giants we have come to love so much?

And perhaps the question Jerry Reese and John Mara need to ask more than any other is this. Has the time come to turn the page on this Era of Giants football? If not, then Reese and Mara putting the players and coaches on notice this year was total bullshit. The players, the coaches, they all need to be accountable for this mess. And starting now, it is up to Reese and Mara to fix it. Not Coughlin. Give him credit at his age…he tried, but his voice has obviously grown old…and it looks like his players are tired of hearing it.

The ones that talked this week…they have been with Coach Coughlin for years now. They know his policies, they know what he believes in. They still took it upon themselves to buck what their soon to be 68 year old Hall of Fame head coach believes in, willingly. And Coughlin had no clue it was happening. The quote again…with keywords and phrases capitalized for drama purposes…

‘TALK IS CHEAP, PLAY THE GAME’ IS MY POLICY and I, quite frankly, was UNAWARE of the two that were made and people made a big deal about that. I DON’T BELIEVE IN THAT STUFF. I think you play the game. Talk is cheap. Play the game. I don’t see anything that gets accomplished by the verbalization part of it. WE’VE NEVER BEEN A TEAM THAT HAS BEEN ONE TO PROVIDE BULLETIN BOARD MATERIAL I understand there was a little bit of that last week and I don’t believe in any of that. AS A MATTER OF FACT, I SPEAK OUT VERY STRONGLY AGAINST IT.”

IF THE TEAM DOESN’T RESPECT COUGHLIN’S WAY OF DOING THINGS THIS YEAR, THEY WON’T RESPECT IT NEXT YEAR.

IF THESE OLDER PLAYERS WANNA TALK SMACK ALL OF A SUDDEN — LET THEM GO SOMEWHERE ELSE AND DO IT…THIS IS NOT THE GIANTS WAY. IT IS TIME TO REBUILD…

AND IF COUGHLIN, IN THE MEDIA MECCA OF THE WORLD IS “UNAWARE” OF HIS TEAM TALKING TRASH ABOUT OPPONENTS…THEN HIS TIME HAS PASSED AS WELL…

IT IS GOING TO BE A VERY INTERESTING 7 MONTHS FOR MARA AND REESE BEFORE TRAINING CAMP OPENS IN AUGUST…. STAY TUNED.

IN REESE WE TRUST

Thomas never used the word “guarantee”; ESPN used it as a headline. That said, I agree with the rest of your post.