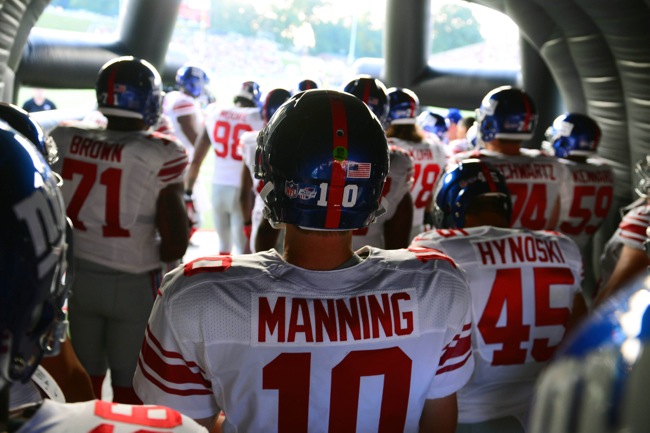 Giants 1st team offense is scary, and not in a good way.

The game started at 7pm on Saturday night, but I wasn’t able to watch it until 11pm on NFL network.  I had my phone on silent…no texts, no social media and no phone calls.  I was on an information freeze.  I wanted to see and react to what happened in real time, not by second-hand accounts.

We should be worried, Giants Nation.

Now, I will be the first to say that this is preseason, and this shit does not matter in terms of wins and losses, however in terms of progress, what we saw last night is damn troubling.  Now, we did see some encouraging things from the defense and also some great performances from individuals late in the game, but nothing got me so fired up or excited enough that I was unable to forget just how horrendous this 1st team offense looked the entire time they were in the game.

With that being said, let’s take a closer look at the positives and negatives with a little something I like to call P.N.P.   Positive-Negative-Positive!

The New Kids on The Block!

Ryan Nassib – 11 for 15, 158 yards and 1 TD  — Nassib looked sharp in the 4th quarter.  Keep in mind he was playing against 3rd and 4th teamers, but he looked confident and was precise with his reads and throws.  He took what the defense gave him in certain spots and made some special throws on that final drive—like the two to Adrien Robinson.  The 27 yarder to Harvey was a pretty pass as well, where he stood tall in the pocket and made an accurate throw 20+ yards down the field on a line.  Hopefully, this ends the debate over who the 2nd QB is, because Painter is God awful.  Nassib has some potential and should not only see time against the Jets as the 2nd-stringer, he should start the 4th and final preseason game. From here on out, there is no need for Painter to take reps away from Nassib.

Corey Washington – 3 catches for 20 yards and 1 TD – Three games, three game-winning TDs. #Impressive – Even though it’s preseason, this kid has been quite the pleasant surprise.  So far, he has shown the ability to use his body to get position on opposing CBs while securing the ball for the catch on shorter routes.  However, the thing to take notice of is how he attacks the ball in the air on deep passes and the fade routes.  I don’t know about you, but I for one am ready to see Washington get some reps with the 1st team.

Marcus “Soup” Harris – 4 catches for 41 yards – Soup’s on again, folks. Harris once again showed quickness, toughness and good hands while making some key 4th quarter catches for Nassib.  Harris seems to just have a feel for the routes and where to sit in the windows that the defense lets open up.  He is another one that we should see get some reps with the ones.

Adrien Robinson – 2 catches for 59 yards and one hell of a spin move – We FINALLY got a glimpse of the talent Jerry Reese has been raving about for years now.  On 4th and 16, Nassib found Robinson down the seam spinning back around to his left to make a touch-catch in traffic,  but it was the very next play that provided the WOW factor.  On the next throw, Nassib fired a gorgeous pass to Robinson who did a great job lunging forward to snag the ball and then, had the awareness to come down with the ball, plant his leg, and spin away from a would be-tackler to gain some extra yardage.  Hopefully, this is a performance that the young man can build on moving forward.  We saw the talent, now we have to hope he can do it in practice to prove to the coaching staff he can perform on a consistent level.

Steve Politi of NJ.com tweeted, “Look: Do NOT draw conclusions from the NFL preseason. That said? Holy crap, the Giants’ offense stinks.”

“Eli Manning went 1-for-7 for six yards. He had a 51-yard completion to Victor Cruz, but Cruz fumbled and an Indianapolis penalty wiped out that mistake. Manning threw an interception—an awful decision to throw the ball to Cruz—that was also wiped out by a Colts penalty.

The Giants averaged 1.8 yards per play and gained just 48 yards.

Three of the Giants five first downs came thanks to Indianapolis penalties.

Those are just the raw numbers. Discouragingly, the Giants could not block any of the Indianapolis blitzes or stunts in pass protection. They couldn’t move the pile to create running lanes either.

Cruz can say that, but it has to be alarming that no noticeable progress has been made offensively. The Giants, right now, don’t block, pass, or run very well. They have two preseason games left to find some answers.”

So, I am not the only one starting to get a little concerned when it comes to this offense.  There was zero push from the offensive line and hence, no running game to speak of at all. Blitzers were coming through, untouched, causing Eli to throw off his back foot. Eli threw a horrible interception that was negated by a penalty.  And when they finally did do something right—like the long pass to Cruz—he fumbled.

Did I expect the Giants to look like the greatest show on turf last night?  No.  Did I expect to see improvements and progress in the new offense? Damn right I did.  All we saw last night from this unit was ineptitude.

The line looks shaky to say the least, and unless Mosley wakes up or the Giants make a move for Alex Boone, sign Richie Incognito or find Chris Snee a fountain of youth—we should all be worried that he alone may get Eli killed this season.  The blitz pressure was coming right up the middle at Eli, forcing him to rush the throws and make them off his back foot…like last season.  Uh oh! That alone is cause for concern and when you add in the fact that the line—except for one play last week (Jennings’ 73 yard TD run)— has not provided a push at the line of scrimmage, it raises multiple red flags.

On a side note…one has to wonder if Eli is losing confidence in Rueben Randle in general.  In Thursday’s practice it was reported that Randle again ran an incorrect route.  Randle neglected to turn around for the ball, and that mistake resulted in an interception by Bowman.  This is the reason why I would let Harris and Washington get some 1st  team reps…it may be time to send a message to Randle and Jernigan…step up, or sit down.

We always like to end on a positive note, so let’s try to find a silver-lining to this black cloud…

It’s preseason and there is nowhere to go but UP.  How is that for optimism….?

Hey, I expected to see vast improvement between the Hall of Fame Game and now, but that hasn’t happened.  Am I throwing in the towel? Not at all.

But, to sit here and say—after seeing this offense last night—that I am not concerned, well…that would make me full of shit, and although I maybe an asshole…I am not full of shit.

Listen, they should get better.  There is talent here and sometimes it takes time to come together, but seeing week-to-week progress from this unit is not asking for too much.  I am not of the mindset that we need this offense to score 30+ a game.  I think with this defense and a solid running game, this team can win the division as long as they protect the ball.

However, a solid running game is not a given though because we now have Jennings and Williams…we need this line to play better and fast.  I don’t care about all the weapons.  Cruz, Jennings, Randle, Williams, Washington, Harris, Jernigan and last but not least ODB won’t be setting off any fireworks unless Beatty, Schwartz, Walton, Mosley and Pugh gel as a unit.

Can this be as simple a fix as just letting this line keep playing together? Maybe.

It was Beatty’s first live action this preseason. Schwartz is new to this system and these players, as is Walton, who missed time last year with an ankle injury.  These problems may all alleviate themselves in time with the players just getting more comfortable with the scheme and each other…let’s just hope Eli is still standing by then.

We have time, three weeks ‘till opening night in Detroit, but tic-toc, fellas…it’s getting late early.