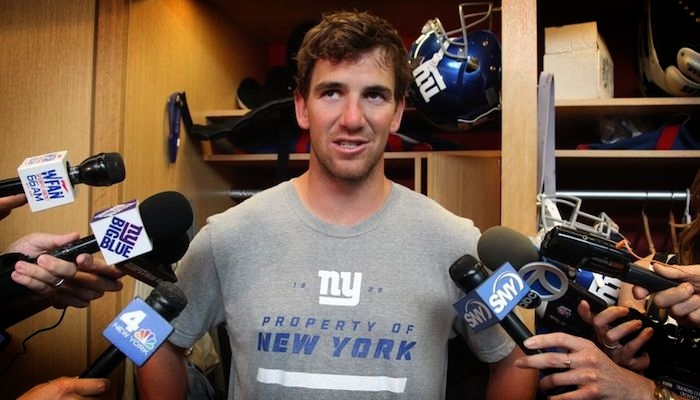 Hello Bleed Big Bluers I have been getting some questions from our brethren out there in social media land on some pressing issues about our Giants heading into this year.  In this post we will answer some of the questions from our Bleed Big Blue Faithful and provide you with ways at the end to get your Giants questions answered for the next go round…and I hope to see you all at the Bleed Big Blue Philly Pig Roast with Pig Guy NYC  to open the season at Mad River Manayunk in Philadelphia…(shamless plug)…

George Perry from the Facebook asks… “I’d like to know what you think about the rookies they drafted this year?  And do you think this will benefit the Giants team?  Hoping the rookies will do something to make this and 2015 a good year? Thank you.”

Hello George and thank you for the question.  Every fan of every team has high hopes for the incoming class.  We all hope that our GM hits one or two “homeruns” during draft night every year.  However, to know the true value of a draft it takes something a lot of fans don’t have…patience.

It’s a lot easier said than done for a rookie to come in and make a tremendous impact right away, however this class does have a lot of promise.

I’d temper expectations on Beckham, Jr a bit, especially early in the year.  Not because I don’t think he will be an explosive player in the future, but mostly because WR might be the most difficult position to transition into from the college game to the pro level.  It takes time.  I fully expect  Beckham to “wow” us a couple of times this season with his raw God given abilities, but it would be unfair to expect him to light it up in his first season.  His polished route running and big play ability will get him on the field early, but it will come with growing pains.  Don’t fret though…he is going to be breaking ankles and making plays well beyond 2015 for Big Blue.

The two guys that I’m more excited about helping us right away are Weston Richburg and Andre Williams.

Richburg is day one starter and should be around here for a decade or so.  He’s a throw back, Tom Coughlin type player who should fit in and contribute immediately in turning this offensive line around from a weakness to a strength.

Williams may have been the steal of the draft when we look back in a couple of seasons.  This is a guy that should also contribute right away, as unlike WR, RB is one of the easiest transitions from college to pro ball.  His downhill, north/south, yards after contact type runs should make him a fan favorite right away. He did lead the nation in rushing last season and was a Heisman finalist…Reese may have “gone yard” with this 4th rounder.

Ren Kocsis from the Facebook asks… “Do we have a lock at TE with Daniel Fells or are we still open to other options?”

Hello Ren, and thanks for the question.  First off let us look at Fells career numbers.

I think that is fair to assume that the Giants are hoping that either Donnell, Robinson, or both, will jump Fells on the depth chart as camp continues.  I do not think that Fells is the answer at TE at all.  In the end I am expecting the GMen to keep 3 TE’s and I’d be surprised barring injury if it wasn’t, in any particular order, Robinson and Donnell who make the cut as the first two.  The 3rd would be Kellen Davis,who is a tremendous run blocker. (Answer Update: As of yesterday Donnell was the #1 TE on the depth chart.  The depth chart is meaningless this early, but you can see that Fells is more for depth in case of injury.)

Johnny “Diamonds” Kaya  asks via the Facebook…”Well let’s see I’l start off with my first question here…….Given the fact that we are entering a new era as far as our D-line is concerned without anyone of the “Big 3″ being there, (no Strahan, Osi, or JT), do u think management was so concerned that there would be such a major drop off in our ability to get to the QB and that is why they concentrated so much on strengthening the back end with the signings of DRC, Thurmond, and Demps? Are the Giants conceding the fact that we better be able to cover the receivers a lil longer since the pass rush just simply won’t be there?”

Great question Diamonds….my answer? No and No!

I don’t think they are conceding the pass rush at all, nor do I feel that was the reason for investing in the secondary.

First off, let’s remember despite Tuck’s gaudy 11 sacks last year, 6 of them came in 2 games against the Redskins who’s offensive line last year was just as bad as ours.  Tuck did finish 10th in overall performance per PFF for 4-3 defensive ends, but the Giants went out and signed a younger player who was ranked 11th  in Robert Ayers…and Ayers did so playing in a rotation.

I for one am not concerned about the pass rush.  A couple of reasons why…

Ayers, was a 1st round pick at DE, he got shuffled to LB and ended up in a rotation at DE in Denver last year and still produced.  DaMontre Moore is developing nicely and might just be the next great Giants pass rusher in training.  Hankins is a guy who can take on blockers and disrupt in the backfield.  If JPP is healthy and getting double teamed along with Big Hank taking on some blockers it’s open season on QB’s with Fewell’s complex blitz packages.

As far as the secondary goes, I think this was more about the NFL then our pass rush.  Cornerbacks in the NFL are like starting pitchers in baseball, you can never have enough.  Throughout the league we see 3 WR sets being used more frequently, and the game is  more spread out and hands off then it has ever been.  You have to be able to cover 3-4 wide outs on a given play, and a TE.  The Giants are now equipped to do that.  If healthy, the combo of Prince, DRC and Thurmond coupled with Rolle, a healthy Stevie Brown and up and comer Cooper Taylor should provide Big Blue with options to make things difficult on opposing offenses.

All said and done Diamonds, I think to your point, yes, these units go hand in hand.  If you can cover longer you can get to the QB more.  Or, if you pressure well, there are more errand throws to pick off or make a play on.  However, I don’t think they addressed the secondary because of a lack of pass rush or change in philosophy.  I think Reese and crew just wanted to get  more talented all over. Going into this season they are faster and more athletic on defense across the board.  Hopefully, we see the moves pay dividends this fall and winter.

Cousin Joey from Jersey ponders…”How much longer will Jerry Reese’s patchwork plan work or will it crash and burn this year? It’s worked in previous years and I believe he did a decent job this off-season, but again neglected linebacker and no viable TE on the roster?”

This is a loaded question…so many things factor into the making up of a roster.

In my opinion, it is hard to address every roster need in today’s NFL with a hard salary cap and a QB making 15-20 million per year.   It’s impossible to pour money into all the teams needs. That makes it extremely important that you hit on certain players in the draft, find a player or two that can help from the undrafted rookie free agent pool and to find free agency bargains. Then you have to have the patience to sick to a plan and see how it pans it out.

But let’s stay with the positions you asked about specifically.

Tight End – I’m not going to lie.  I was shocked that Reese and company did not draft or sign some of the bigger TE names this off season.  But what is “In Reese We Trust” if we don’t trust Joe?…

We as fans speculate and speculate but maybe Mr. McAdoo, who coached the TE’s in Green Bay, saw something he liked in Donnell and Robinson and decided to coach them up.  The Giants addressed huge areas of need via the draft at WR, C/G, D-line and RB…the value was not there for Reese at TE and he was content to roll the dice on the players in house, hoping we have another Kevin Boss or Jake Ballard in the making.  My pick is Donnell to surprise a lot of people.

Linebacker… Yes, they could have splurged a little more here or drafted a guy that is more touted then the names we currently have (Chris Borland in RD 3 for one), but they didn’t.

When you look at the backers now, we have Beason, who I think we all love and for good reasons.  Jameel McClain who will be a lot more then serviceable on the strong side this season with his ability to play the run physically and aggressively.  And maybe a Pro Bowler at the WILL spot in Jacquian Williams.  Don’t laugh; it looks like patience has paid off for the Giants in letting this kid develop over the years.  Williams has turned himself from a speedy coverage and spy type backer, to an all three down linebacker who has put on some extra weight this off season and is primed to have a break out year.

When you look at linebackers in the league now they are more situational. A lot of guys play according to down and distance.  In the Giants system, using two backers and three safeties is a lot more common against the spread sets shown by the Eagles, Redskins and Cowboys.

That’s why the development of later round picks and undrafted talent like Williams, Cooper Taylor, Markus Kuhn, Adrien Robinson and Larry Donnell are so vital to this teams success. Young, cheap homegrown talent is a must have in this league with a expensive QB on the roster.

Hopefully, Jerry’s bargain shopping and patience with some of the drafted is about to pay off.

If you have any questions you want answered about our GMEN hit me up on Twitter @Trifecta24,  Facebook Fan Page —Or better yet leave a comment below.

Plaxico Burress We were 11-1