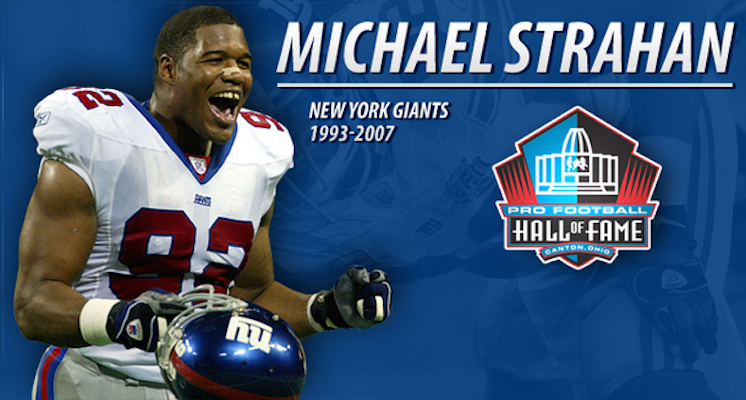 Here is an Email From Giants.com
Michael Strahan, one of the most dominant and popular players in the nine-decade history of the Giants, is officially a pro football immortal.  The defensive end, who played his entire 15-year career with the Giants from 1993-2007, will be inducted this weekend into the Pro Football Hall of Fame.
For videos, photos and complete coverage on Michael Strahan’s Hall of Fame career, click here.
Enshrinement Ceremony
Saturday, August 2
Coverage begins at 4 PM, Ceremony at 7 PM
NFL Network
New York Giants vs. Buffalo Bills
Sunday, August 3
8:00 PM
TV: NBC
Radio: WCBS 880 AM
Coors Light Giants Gameday begins at 7:05 PM

Michael Strahan to be honored at November 3 Giants game

In addition to this weekend’s ceremony, Michael Strahan will receive his Pro Football Hall of Fame ring in a halftime ceremony on November 3, when the Giants play host to the Indianapolis Colts on ESPN’s Monday Night Football.
HeadlineHOFMichael Strahan
0 comment
0
FacebookTwitterPinterestRedditEmail

Is Kurt Warner A Hall Of Famer ?

MY ALL TIME NY GIANTS TEAM