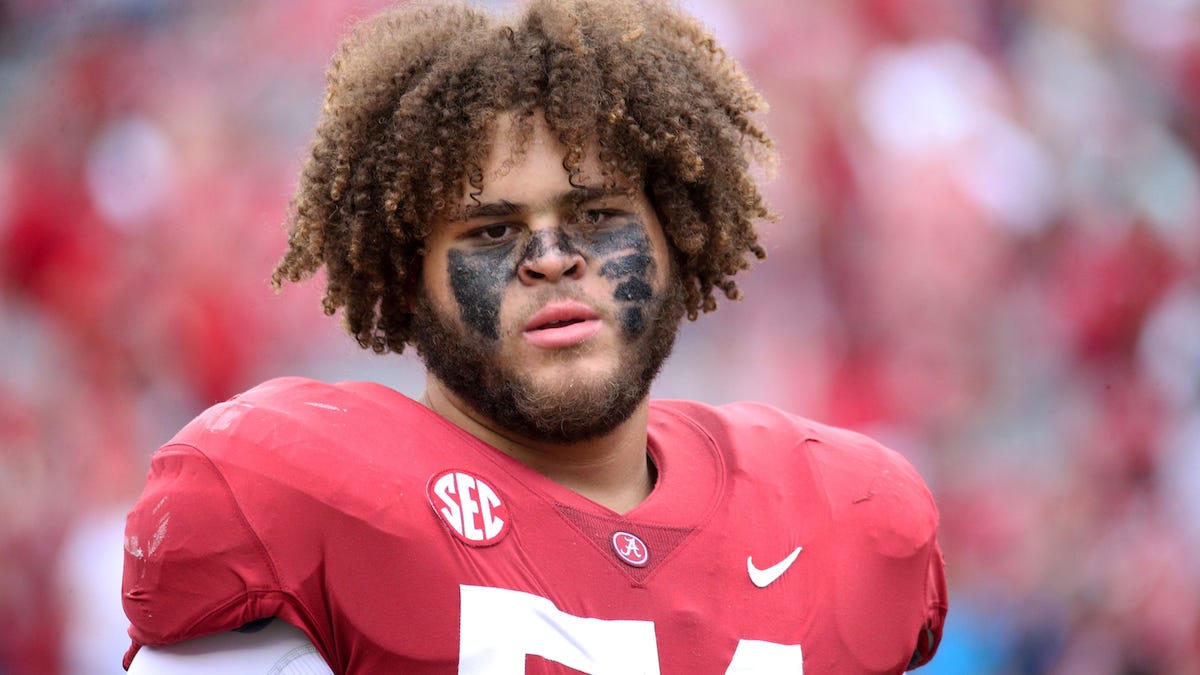 Giants leaning towards Jedrick Wills with their 1st round pick. Can he help tackle some of the problems of Big Blue’s offense?

Within days of the 2020 NFL Draft, the stories and rumors begin to swirl.  The debate between what wins championships, offense or defense still rages on.  Good news for Giants fans, they need plenty of help on both sides of the ball. When it comes to offense, however, tackle seems to be the position that all analysts think the Giants need to make a priority.  Enter, Jedrick Wills, offensive tackle from Alabama.

What makes tackle a priority?

When you look at last year’s offensive line for Big Blue, there were areas of strength and areas that needed work.  The guards on both sides (Zeitler and Hernandez) played exceptionally well and are both young.  The starting center Jon Halapio played below expectations and was released during the offseason.  Center could be a position that is addressed in the draft in later rounds, and GM Dave Gettleman has already stated they may already have a replacement on the team (Nick Gates).  Nate Solder had a career-low season at starting left tackle, which most people think would place him on the list of players to be replaced.  However, most reports indicate that Solder is not only being paid too much to be released but more importantly had several personal issues going on that may have limited him from playing his best ball.  Right tackle was a shared duty through the season.  It started as a position that was filled by Mike Remmers, who played an average level of football and then had injuries take him out of his role.  Remmers was replaced by Nick Gates, an undrafted free agent from Nebraska, who did a pretty good job considering.  However, the pressure on both Jones and Barkley was apparent and limited them from performing to the best of their abilities.

The number one reason that Wills will get a lot of attention this draft is because of the division he played in.  As the starting right tackle for Alabama, Wills was facing the best pass rushers in the country.  In doing so, he was able to allow only one sack all season, and three and a half pressures.  A lot of other tackles will have stats that are impressive, however, they will not be this good and they will not be against competition as strong as what Wills faced. Wills award list is vast and includes earning second-team All-American accolades from the AFCA, being selected by Pro Football Focus as a third-team All-American at tackle,  as well as named the All-SEC First Team by the Associated Press, and a second-team Midseason All-American by the Associated Press just to name a few. Wills is a mauler, who takes pride in his ability to play after the whistle blows. He has the personality of a Taylor Lewan or Quenton Nelson in that he plays with attitude and toughness that is not always seen on an offensive line, and that the Giants currently lack.  New head coach Joe Judge will have the inside scoop on Wills due to his past position with Alabama.  New running back coach Burton Burns will also know Wills well from his time at Alabama.  There really are four tackles that are in the conversation to go first being Mekhi Becton, Tristan Wirfs, Andrew Thomas, and Jedrick Wills.  Many analysts will go back and forth about which one of these four should be picked first, but none of them argue who the best pass-blocking tackle is, and that is Jedrick Wills.  His potential to keep Daniel Jones upright and healthy, will not only allow the passing game to be much stronger but will help the run game at the same time.

When really looking at the tape, it is hard to come up with too many faults to find in Jedrick Wills. Like most college players, there are times where his handwork could be improved (especially against the spin move), as well as improving protection during the rush plays.  He was only beaten a couple of times last year, so focusing on those plays to see what the problem was will be essential in figuring out how to improve. On those plays, Wills was either tired or was not giving the same effort.  However, motor or effort being in question on three plays out of the whole season is really reaching for problems.  It seems like the biggest con for Wills is going to be the amount of depth at the Tackle position in this year’s draft. The question will become for the Giants brass, is he a sure-fire for the next ten years as a protector of Daniel Jones and Saquan Barkley.  If he is, then they must pull the trigger and make the selection. Let’s say the Giants improve this season and make it to at least a 7-9 season.  Would you rather be 7-9 knowing that your o-line is set and your franchise quarterback and running back are safe, or would you rather be 7-9 with a solid defense and your quarterback, who went through another season of pressures and fumbles, and a running back who was injured?  No one knows for sure what the pick is going to be, but one thing is for sure.  For a meat and potato style of GM like Dave Gettleman, Jedrick Wills is definitely on his radar.

“Giants Leaning Towards Jedrick Wills ” was written by Guest blogger Christopher Keene Please leave feedback in the comment field below, I would love to know what you think.