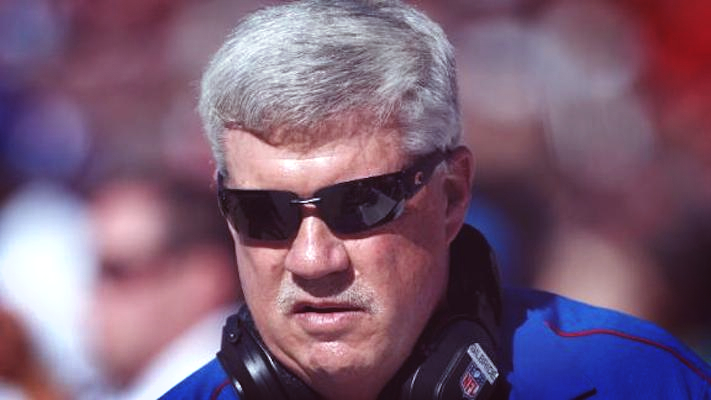 Mention the name Kevin Gilbride to a Giants fan and be prepared for rolling of the eyes, teeth sucking or the ever smart reply of Kevin Killdrive. And I think those feelings have only magnified after the disastrous 2013 season, as well as John Mara’s end of the season press conference were he called the offense broken and made Gilbride a scapegoat. I’m proud to say that I’m not one of those fans and I always appreciated and respected coach Gilbride. Though I’ve had my moments of frustration and anger with Gilbride, the always popular 3rd and long draw play comes to mind.

The one moment I can’t seem to forget and it literally still haunts me in my dreams happened in the 2008 Divisional playoff game vs. the Eagles. It was still early in the game and we had 1st and 5 after an Eagles penalty. Well 3 straight passes were called, all of them incomplete, followed by a punt. I remember sitting in my seat at old Giants Stadium in disbelief. We had just completed a season with two thousand yard running backs and lost our best wide receiver, but we didn’t even attempt a single run play. At that moment I felt like the game was lost. But those are only a handful of moments and one really bad memory in Gilbride’s 7 & ½ years as offensive coordinator that brought 2 Super Bowl Championships and 5 top 10 offenses to the New York Giants.

When you look back on his time spent with the Houston Oilers as well as with the Giants (2 teams he spent the most time with) it’s impressive and I don’t know why he never received as much praise as some of the other coordinators in the league. In his 4 seasons as offensive coordinator and being the primary play caller in Houston (1990-1993) they had 13 offensive players make the pro bowl, finished in the top five 3 times on offense and the one season they didn’t was a 6th place finish.

In Houston he ran the Run and Shoot offense. The Run and Shoot is mostly a single back formation with 3 wide receivers and a tight end, the receivers generally motion/move before the snap to create mismatches and than adjust their routes after the snap based on what they see in the defense. Running this scheme took advantage of future hall of famer Warren Moon’s big arm and quick release. He made the pro bowl all 4 of those seasons as well as throwing for over 4,500 yards twice (this was the early 90’s when it didn’t happen often). Five of Moon’s nine career pro bowl appearances came under Gilbride (he also made it in 89 with Gilbride as quarterback coach, which led to Gilbride being promoted to offensive coordinator). So we have a first ballot hall of famer (who I think is one of the most underrated and under appreciated quarterbacks of all time) that thrived under Gilbride’s tutelage.

His time in Houston alone shows how good of a play caller & offensive mind he was. Now let’s talk about his time with the Giants. He became permanent offensive coordinator before the 2007 season (he took over play calling midway through 2006 on an interim basis). With the Giants Gilbride ran more of a balanced offense but it still had elements of the Run and Shoot.

Though the Giants didn’t have any offensive pro bowlers and finished 14th in offense that year, Gilbride’s play calling late in the year as well as the feared Giants pass rush were the main reason for an unlikely playoff run. His play calling in Super Bowl 42 was some of his finest with the Giants. A record was set for longest opening drive in a Super Bowl just under 10 minutes (9:59) as well as a record for most 3rd down conversations on an opening drive at 4. In all 8 third downs were successful and 1 huge fourth down. The season ended on a high note beating the undefeated New England Patriots in Super Bowl 42 and becoming world champions, the first of Gilbrides career.

The 2008 season was a great one for the Giants offense finishing 3rd in the league on offense. Eli Manning & Chris Snee made their first career pro bowls. Gilbride also showed his versatility as a play caller as the Giants had the leagues number one rated rushing offense, as running backs Brandon Jacobs and Derrick Ward both had thousand yard seasons. I truly believe if Plaxico Burress didn’t put a bullet in his leg the Giants would have repeated as world champions.

2009 was another good one for the Giants offense finishing 8th in the league. Three of the five offensive linemen made the pro bowl (Chris Snee, David Diehl, Shaun O’Hara) as well as Steve Smith becoming the first Giants wide receiver to make the pro bowl in 41 years and becoming the first Giants receiver to have over 100 catches (107). Eli Manning throw for 4,000 yards for the first time in his career, four players had over 500 receiving yards(Steve Smith, Mario Manningham, Hakeem Nicks, Kevin Boss) and two running backs had over 700 rushing yards (Brandon Jacobs, Ahmed Bradshaw). The Giants missed the playoffs because of the embarrassing defense led by one and done coordinator Bill Sheridan.

The 2010 Giants offense finished 7th in the league. Shaun O’Hara and Chris Snee made the pro bowl again. Eli Manning had an up & down year throwing for over 4,000 yards and over 30 touchdowns (31) still a career high, but he also turned the ball over 32 times (25 interceptions, 7 fumbles). Offensively the team was balanced finishing 10th in passing and 6th in rushing. Four players had over 500 yards receiving ( Hakeem Nicks, Mario Manningham, Kevin Boss, Steve Smith). Ahmed Bradshaw had his finest season rushing for over 1,200 yards and Brandon Jacobs also rushed for over 800 yards. The Giants were well on their way to the playoffs until… well we all remember what happened vs. the Eagles in week 15 that season.

In 2011 Gilbride brought back some of his Run and Shoot magic since both Ahmed Bradshaw and Brandon Jacobs battled injuries throughout the season. This season in my opinion was his finest as a play caller. I remember everyone (myself included) was concerned about the team especially the offense because we lost 3 key starters (Steve Smith, Kevin Boss, Rich Seubert) and it didn’t seem like any adequate replacements were brought in. Eli Manning had his finest season and was our lone pro bowler, throwing for just under 5,000 yards (4,933; a Giants record), 29 touchdowns, 16 interceptions and a 92.9 quarterback rating.

The team finished 9th offense in spite of a run game that finished dead last at 32nd, but the Giants had the 5th rated passing offense. The Giants had 4 players with over 500 receiving yards (Victor Cruz, Hakeem Nicks, Jake Ballard, Mario Manningham). Cruz and Nicks became the first pair of Giants receivers to go over a thousand yards in the same season. After struggling early and in jeopardy of losing playing time (remember Brandon Stokley being signed?)Cruz came out with a bang in week 3 vs. the Eagles and shattered the great Amani Toomer’s receiving yards record, becoming a fan favorite (CCCRRUUUZZZ!). The Giants made an unlikely late season playoff run, offensively riding Manning’s right arm all the way to their second Super Bowl Championship in five years once again defeating the New England Patriots.

In 2012 the offense once again found balance finishing 12th in passing and 14th in rushing and 6th overall. Eli Manning, Victor Cruz and Chris Snee made the pro bowl. Four players finished with over 500 receiving yards (Victor Cruz, Hakeem Nicks, Martellus Bennet, Domenik Hixon) but the passing game was inconsistent partially due to Hakeem Nicks’s injuries and no one stepping up as the third wide receiver. Ahmed Bradshaw had his second thousand yard season, as well as Andre Brown and David Wilson showing flashes of talent. But the team was up and down throughout that year and horrible performances in weeks 15 and 16 pretty much killed a chance at the playoffs.

We all remember the disaster that was 2013, the offense was pathetic. But I really feel a lot of it had to do with injuries on offense, particularly the offensive line. The Giants had no one to step up for the starters that went down, the roster lacked depth. Maybe some of the struggles might have been on Gilbride’s play calling. He’d been a successful coach for over 20 years with an impressive track record, so I highly doubt after all that the time his scheme no longer worked. I understand someone had to take the blame when you play as bad as the Giants did offensively in 2013. I just don’t think Gilbride should have been that guy, he deserved better than that. Instead of putting Tom Coughlin in an awkward position of potentially being forced to fire him by ownership, he retired. That alone speaks volumes to me about the kind of man Kevin Gilbride is.

I hope anyone who reads this finds a new appreciation for what Kevin Gilbride brought to football in a career that should be celebrated and remembered fondly. Thanks for 7 and ½ years and 2 Super Bowl Championships!