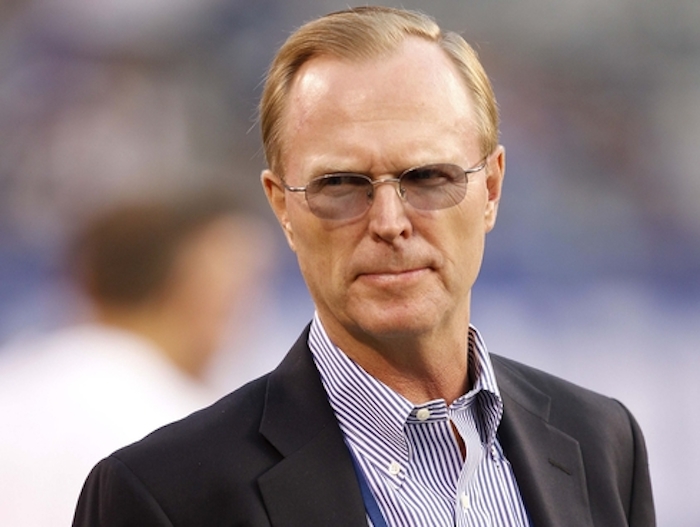 We are weeks away from the start of training camp. OTA’s are under way and Big Blue is in the process of getting acclimated to a new offensive system, incorporating the new players acquired through free agency and the draft on offense and defense and basically putting a God awful 2013 behind them.

I read recently something that left me scratching my head. This is the reason I enjoy reading and discussing with fans in the know as opposed to beat writers with their heads up their ass.

I read this week that because Coach Coughlin is 68, God bless, and since Eli is 33, that the Giant’s window is closing on what would be our 5th Lombardi trophy.

To quote the great Samuel L. Jackson in Pulp Fiction…”Well allow me to retort!”

After seeing how the Giants attacked this off season I have a hard time accepting the window is closing on our #DriveFor5. In my humble opinion, the moves ownership and the front office made this year has busted the window and the wall it resides on wide open, and they redecorated with a bright and beautiful sunroom. We should all be enjoying the view and the breeze as we bask in the Big Blue sunlight.

Let’s discuss this real quick. Weatherford and Brown’s age I don’t think we should be concerned about at all, considering the positions they play, their age at this point is not a factor.

Deossie, Reynolds, Fells? Nice role players at this point but losing anyone of these guys wouldn’t exactly call for a red alert.

Jenkins and Patterson? They both played well last year after leaving the Eagles for Big Blue, and both will play important roles on the defensive line this upcoming season, but the odds of both of them returning in 2015 is farfetched, and the prospect of losing both of these players shouldn’t get our Big Blue knickers in a bunch.

Kiwi and Snee? Well, I like most Giants fans am rooting for Snee to comeback this year and find the fountain of youth. If Snee is healthy and can contribute anywhere close to what he was before his injury, this offensive line becomes a huge strength. If he can stay healthy this season, and considering the pay cut he took, we may be looking at a couple of one year salary cap friendly deals for Snee until he can retire a Giant.

Kiwi? I’m actually shocked he didn’t get cut. Per PFF (Pro Football Focus), Kiwi was the worst 4-3 defensive end in league last year. I understand keeping Kiwi for depth purposes and because he isn’t a big hit against the cap. Let’s hope Kiwi, who will be a free agent going into 2015 can provide some punch on the D-line this season, but odds are this is his last year in Giants blue.

That leaves us with, Rolle and Eli, arguably the two most important players on the team.

Rolle? Well, as a Giants fans, how can’t we love this guy? Vocal leader, accountable, motivates, speaks his mind and apparently one hell of a recruiter if you were paying attention to the Dominique Rodgers Cromartie negotiations.

“He just hit me up and said a couple things that hit home,” Rodgers-Cromartie said. “He was like, ‘I think you can be this and that in our system, and the coaches and everybody else will help you get to it, just buy into it.‘” Cromartie continued… “Whenever you’ve got somebody that believes in you, you want to go out there and just go that much harder, kind of not be a letdown and hold up your end of the bargain.”

And leave it to Antrel not to sugar coat things for DRC….

“I still don’t feel like [Rodgers-Cromartie] has shown what he can truly be in this league, which is one of the best corners in the NFL,” Rolle said.

Rolle has no problem putting players on 21 Front Street. He will call them out and challenge players to play at the same level and with the same intensity he does every game. Rolle will be a free agent next year, but you have to think the Giants find a way to bring him back with a contract to satisfy their defensive captain to be with a cap smart deal.

That leads us to Eli Manning…

My childhood hero, Phil Simms, gave his opinion on Eli and Bob McAdoo’s version of the west coast offense coming to Big Blue this season.

Simms remembered he dealt with a similar transition when Dan Reeves was his new head coach in 1993 after the Ray Handley debacle. Simms made it to the Pro Bowl that season and even received a few votes in the MVP balloting.

“It will be for Eli like it was for me. You have to win the new coach over. He’s going to have to do things faster than everybody else [on the team], and he’s going to have to prove himself all over again,” Simms said. “I have great respect for [former offensive coordinator] Kevin Gilbride winning two Super Bowls. He was worried about hitting four of those big passes every game, and I love that about the Giants’ offense. It wasn’t 17 screens every game, but I would think the West Coast offense and some of the thinking will help the quarterback. It’s not always putting the pressure on the quarterback, which I am a big believer of in today’s game. Give the quarterback 50 percent of his completions as ‘gimmies.’ There are other times you want to make those four or five special throws.“

The jury remains out on this subject.

Here is the reality. This is a make a break year for Eli Manning.

I know what you’re saying….”he’s a two time Super Bowl MVP. He led us on those two incredible runs through the play-offs in 2007 and 2011, and he’s arguably the greatest QB in Giants history!”

I hear ya loud and clear, but heed this warning, if as a franchise we live in the past, the window will close on our fingers like that kid in Amityville horror, and that shit looked like it hurt.

Whether we want to accept it or not, the Giants not extending Eli’s contract this off season is a warning shot across the nose of the S.S. Manning.

So how does this relate to the proverbial window closing?

After the Giants June 1st bump in cap space due to the cutting David Baas, the Giants are 7+ million under the cap, and that number can and will be carried into the next off season. The Giants may bring in another guy or two before the season starts, but no one that is going to make a significant dent in that 7 million.

So to quote Austin “Danger” Powers, “Whoopty Dooo…What does it all mean, Basil?”…

Especially in terms of the window being open or closing on a chance to win Lombardi trophy #5?

Here is what it means, the only two players on the roster over 30 that the Giants would miss is Rolle and Manning. That is it…period. End of sentence.

Everyone else on this roster is in their early to late 20’s. I personally can’t wait to see the progress of last year’s draft class. I have high hopes for Damontre Moore, who with a year of experience is still only 21. Johnathan Hankins, who per Pro Football Focus didn’t record a single negative grade in his 195 snaps last season. He finished with an 8.0 overall grade and a 9.5 grade against the run, he’s only 22. Cooper Taylor, who at 24 may be a sneaky pick to have a breakout season considering Will Hill went all Cheech and Chong on us.

Hell, JPP is only 25 and Victor Cruz is only 27…the window is wide open.

As you can see Reese, Mara and Coughlin did everything in their power to get younger, more physical, faster and cheaper this off season, and they passed the test with flying colors.

But let’s get back to Eli for minute. There is one more player we need to consider when talking about the “window”…and his name is Ryan Nassib, 24.

During the NFL combine, Sporting News’ NFL Draft Expert, Former NFL Scout & Front Office Executive Russ Lande, said this: “This week, I had a higher up in NFL tell me none of this year’s QB’s are as good as (Ryan) Nassib” – via Ian O’Connor.

Why is this significant?…Cause Eli is scheduled to make 17 million next year and resigning him to retire in a Giants jersey is sure to take a huge piece of cap space for another 5-6 seasons.

Is it possible that Reese and the Mara’s are taking notes from the Seattle Seahawks on how to build a roster in today’s NFL. The landscape of the league is always changing and fast and if you are not ready to adapt, well, that’s when the windows closes so to speak.

“Life moves pretty fast. If you don’t stop and look around once in a while, you could miss it.” Ferris Bueller

If the Giants believe that Nassib is ready for primetime, and Eli doesn’t do as well as Phil Simms thinks he will, is it at all possible that this is Manning’s last year on the Giants sidelines? And would that be a bad thing? For as much I love and respect what Eli has done here and how he has carried himself as the face of this franchise, if he struggles in McAdoo’s offense, would it be a bad thing to buy out his contract for the $2.25 million he’d be owed and to move on with Nassib and a ton of cap space to add to the talent that has been brought in over the last 2 seasons? As the Seahawks showed us in our own stadium in February, the best team wins, not the best QB.

Of course, this all depends on Nassib’s progress and how Eli responds this season, but it is worth a thought. Let’s remember the 49ers said goodbye to Montana, the Colts said goodbye to Peyton and the Packers said tootles to that Brett Favre guy. To think the Giants aren’t at least keeping their options open is a bit naïve; no one in this league is untouchable, especially if your performance doesn’t match your cap number.

What we do know now is this is a team that is built to compete this season and for seasons to come. The Giants roster is full of proven talent as well as young up and comers, they are in great shape cap wise and for the first time in a long time, there is a back-up QB who can make Eli feel uncomfortable enough to wake him up and motivate him to get this Big Blue Bus back on track and drive it right through this wide open window.

We all are hoping that Eli thrives in the new offense and is rejuvenated this season much like Phillip Rivers was last year, but at least we can take solace in the fact that this is a win-win scenario.

If Eli can duplicate the season Simms had in his final year as Giant, he will get an extension, hopefully not for a number that will strangle the cap, but one he and the Giants can live with and continue to compete at a high level. If he doesn’t, and Nassib shows he’s ready, the Giants have options.

This off season reaffirmed the phrase IN REESE WE TRUST, and no matter what happens this season, the Giants have multiple options moving forward, money to spend and a 5th Lombardi trophy in their sights for the foreseeable future.