Drive For Five Comes Down To Four Key Giants 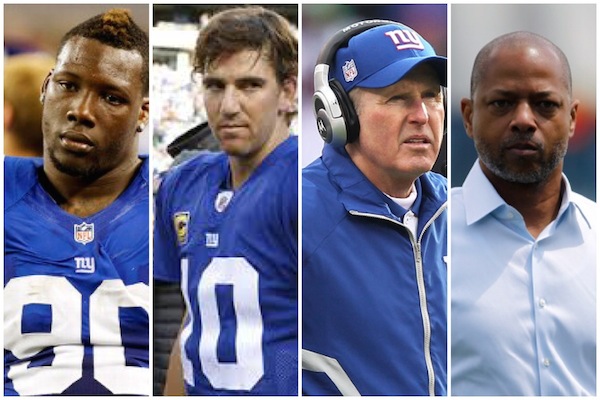 Drive for Five Comes Down To Four Key Giants

Would the Giants be a better team with Ryan Nassib running this offense?   What if I told you the 17 million we would save by buying out Eli’s contract at seasons end was used to rebuild an offensive line and shore up some other areas of concern on this roster?  Would you consider it?

While it seems far-fetched now, this is a realistic possibility if our beloved G-men fall flat on their Big Blue faces again this season.

Take you heart out of the equation and think with your head for a sec.  The fact remains that this season can be the end of a Big Blue Era unless certain parties step up to the plate.  Faces Change, Expectations Don’t!  That is the mantra for this season, is it not?

“James, Coughlin just changed it to “Burn the Boats!”

“Burn, the Boats? What the fuck does that even mean?”

“It’s a mentality … the idea of coming into something with no turning back,” Coughlin told The New York Post. “The whole theme is, there’s no turning back. If you’re here for the right reason, all right? And you share with us the goals. And you’ve put the time and the effort into it, there is no turning back. Once this thing starts, it’s a full commitment, and we have to have everybody in that circle to get it done. And that story just illustrates the way in which the Grecian warriors were treated when they attacked another nation. As they landed onshore, the commanders told them, ‘Burn the boats. Well burning the boats symbolized what? It symbolized that if you survive, you’re gonna defeat the opponent, take his boats, and you will have a chance to return home. But if you don’t do it, you’re not ever going home. So, the idea of that type of commitment, the idea of no turning back, is just an illustration, a story, a parable, which drives home a good message, and that’s what I was after.”

Thanks for clearing that up coach, and I fully agree with you.  Burn the Boats!…Faces Change, Expectations Don’t!…All In!…Talk Is Cheap Play The Game!…it all applies in terms of where this franchise is and why this season can be it for some key Giants figures when all is said and done.

1. Jason Pierre Paul – Defensive End – Hey JPP…Talk is Cheap, Play the Game.  We’ve heard all training camp long how you’re back.  How the old JPP is back. That you are 100% healthy.  That you’re ready to shut people up.  How you were pissed you weren’t named to the NFL’s top 100 players. ENOUGH!!

Talk is cheap JPP, play the game.  It’s a contract year and all of our Big Blue eyes are on you and your every move.  You seem 100% healthy on all those FaceBook and Instragram videos you post.  Now show us on the field on Monday night.  Stop talking and start leading with your actions.

No one cares about 2011 anymore and the freak of nature you were…the plays you made, how you were by far the most talented player on the field for the latter part of that season.  That won’t get you a new contract.  Returning to form will.  They are going to block you with one, two and maybe three guys at once, we don’t give a shit.  Call Strahan and ask how he did it…he was relentless.  Now it’s your turn.  You want a new deal, we want the old JPP.

Find him or it may cost you your job….and millions.

2. Eli Manning – QB – Hey Eli…Faces Change, Expectations Don’t. No more Gilbride.  No more Plaxico.  No more Nicks.  And for that matter, no offensive line.  We don’t give a shit, especially not for 19 million a year. The faces have changed Eli, but the expectations have not.

Listen, we love you. We will always love you.   From the play-off run in ’07, to the throw to Tyree that helped us beat the undefeated Patriots.  From the championship game in 2011 in San Francisco when you took the beating of your life, to the throw to Manningham in the Super Bowl.  We will never forget those memories and the way you have carried yourself in the face of adversity and criticism.  You will forever live in the hollowed halls of Giants lore…but all those memories are in the past.

Only you can answer that question.  Only you can rally the troops and coach up this offensive line…only you can carry your franchise on your shoulders.  No one wants excuses anymore.  New offensive with McAdoo got you down?  Fix it. Randle is running the wrong routes again?  Fix it.  Offensive linemen not blocking?  Fix it. Ask yourself Eli…what would Peyton do?

Two years with no play-offs and 27 interceptions later we don’t care anymore.  We want results.  Many offenses change coaches and systems, and not all of them look as horrendous as we have this entire preseason.  The NFL rules cater to the offense now more than ever and you need to start exploiting them.  We don’t need the greatest show on turf, we simply need some more progress and competency and a lot less ineptitude.

Faces Change, Expectations Don’t Eli.  No more Aw Schuks Eli..its time for some Awwwww Shit! To quote my man Vince Vaughn in Wedding Crashers…”Rule 76 – No excuses, Play like a champion.”

3. Tom Coughlin – Head Coach – Hey Tom, Burn The Boats! Honestly, I LOVE IT!  BURN THE BOATS!  No turning back! No retreat, no surrender! Pain does not exist in this dojo, does it? NO SENSEI!!!  Sorry, I got all fired up for a second.

The season starts Monday, and as we sail into Detroit to tame some Lions, boats shall indeed be burned.  Coughlin has rallied many of teams in the past dating back to his days in Jacksonville.  More recently, he has rallied two Super Bowl Championship teams in a decade under the bright lights of the Big Blue city.  But there was that word again…past.

We are behind you 110% Coach.  You deserve to go out on a much higher note than the mess that was last year…and this year is your opportunity.  Without a play-off appearance and maybe even a win or two in said play-offs, this maybe the end of not only your tenure as the coach of the New York Football Giants, but your NFL career.

Burn the Boats Coach Coughlin…you either lead this team to greatness and take the other guys boats, or you may never be seen on the Giants sideline again.

Fail this season, and we don’t trust no more.  Matter of fact, if this offensive line falls apart, or the linebackers don’t pan out, and if no tight end emerges, I may call Jack Burns from Meet the Parents myself and have you removed from the “circle of trust” and “take you down to Chinatown.”

You spent like a Kardashian this off season, and I’m not mad at you for that.  We needed it.  Roster upheaval was more then necessary after last year, and I for one was thrilled you were aggressive in free agency.  I was thrilled with the picks like Hankins, Beckham, Robinson, Moore, Nassib, Richburg and Williams.  But it’s not my job on the line Jerry,  it’s yours.  If the players you have selected to wear the blue uniforms, the same blue that we as fans bleed, if they fail this season Jerry…it is all on you.  If the interior of that line turns into a saloon door from an old western movie, it’s your fault.  If Adrien Robinson or Larry Donnell don’t turn into legitimate weapons for your quarterback, it’s your fault.  If the linebackers are the same problem they have been in the past, your fault.

We can’t defend you any longer Jerry.  We will always have a fond place in our hearts for you, but we can’t turn a blind eye anymore based on 2007 and 2011.  It is time to carry you’re own weight.

ALL IN Jerry.  This off-season we watched you pull a Jim Fassel and “push your chips to the center of the table.” And on Monday night against Ndamukong Suh, Matt Stafford and Megatron, we see the hand you dealt us.  There is no folding this hand though Jerry, no bluffing…no “all night long with this check check check“…this hand gets played to the end.  And if this hand breaks the Big Blue bank, it is you Jerry who will be busted  worse than Teddy KGB in Rounders.

Donnell And DeOssie Lost For The Season