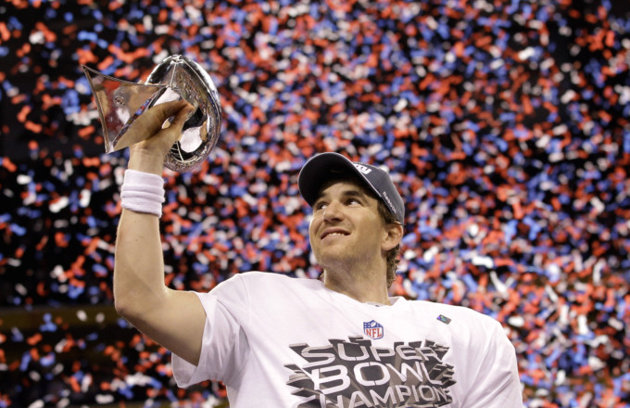 If you read my article last week, you know how I see this whole situation playing out.  We beat the Raiders, phase 1 is complete.  We won…period, end of sentence.  It wasn’t pretty, but honestly, at this point who cares about style points?  A win is a win and keeps the hope alive for another week.

Two huge games are on the horizon (Cowboys, @ Redskins).  Lose to the Packers and both those games will mean nothing.  Every week the stakes get higher.  If the Giants are serious about this being a run for the ages then they have to beat Green Bay.

That rule applies to no one Giants player more than Eli Manning.  It is time for SUPER MANning to “Cape Up”.  We have all made excuses for Eli this season based on his resume.  The greatest Giants quarterback of all time, the franchises all time passing leader, not one, but two Super Bowl MVP’s.

Hey, I get it.  I am one of them too.  Anytime a QB does for a franchise what Eli has donefor the Giants organization, we as fans are sometimes blinded buy our loyalty.  And If Cowboys fans defend Romo til they are Big Blue in the face, then we by all means can defend Eli.  However, now a days that is becoming more difficult for us to do.

Something is off with Easy Eli.  I don’t know if it is the beating he took early in the year or if he doesn’t completely trust any of his wide receivers not named Victor Cruz, but Eli better fix it and he better fix it quick.  I admire how he tries to make plays, his toughness and his lack of fear in a big spot.  There aren’t many other Qb’s I would rather have leading my team late in the game and late in the season when the games are do or die.  And they are do or die starting this Sunday and every other Sunday that follows from here on out.

Super Manning Must Cape Up.  Instead of shrugging those shoulders and tilting your head like a sad lost puppy after a interception, jack those shoulders up confidently before kick off. “Cape Up”…we need you Eli.  We can not complete this run back from football abyss without our Super Mann.  Carry this team starting Sunday against a third string QB named Something Tolzien.  Put us in position to make the Cowboys shake in their cowboy boots next Sunday.

The wide outs are more than capable of making plays.  Andre Brown has sparked the running game.  The defense appears to have their pass rush and their swagger back. The rest of the division has mercifully kept us in it.  “CAPE UP” ELI!!

Be the guy who carried us in 2007 and 2011.  The guy making 20 million a year.  Be the QB we all love and defend.  Give us a reason now more than ever to cheer your name.  If you can find some way to “Cape Up” now and save the season for us all, you will truly be Super Mann!!

I don’t klnow about you, but I’m channeling my inner Thorton Melon — “HEY ELI…GET YOUR SUIT ON…WE NEED YA”

I’m keeping it short and sweet this week Bleed Big Bluers.  Let’s take care of the Packers 1st… then we can get ready for a new season and Cowboys week.  Temper your enthusiam, stay humble and hope Eli turns it around just in time for the real season to start.

And my upset of the week — (even though they are favored)

Panthers -2.5 over the Patriots — Brian Fantana: [about Veronica] I’ll give this little cookie an hour before we’re doing the no-pants dance. Time to musk up.

Ron Burgundy: Wow. Never ceases to amaze me. What cologne you gonna go with? London Gentleman, or wait. No, no, no. Hold on. Blackbeard’s Delight.

Brian Fantana: No, she gets a special cologne… It’s called Sex Panther by Odeon. It’s illegal in nine countries… Yep, it’s made with bits of real panther, so you know it’s good.

Ron Burgundy: It’s a formidable scent… It stings the nostrils. In a good way.

Ron Burgundy: Brian, I’m gonna be honest with you, that smells like pure gasoline.

Brian Fantana: They’ve done studies, you know. 60% of the time, it works every time.