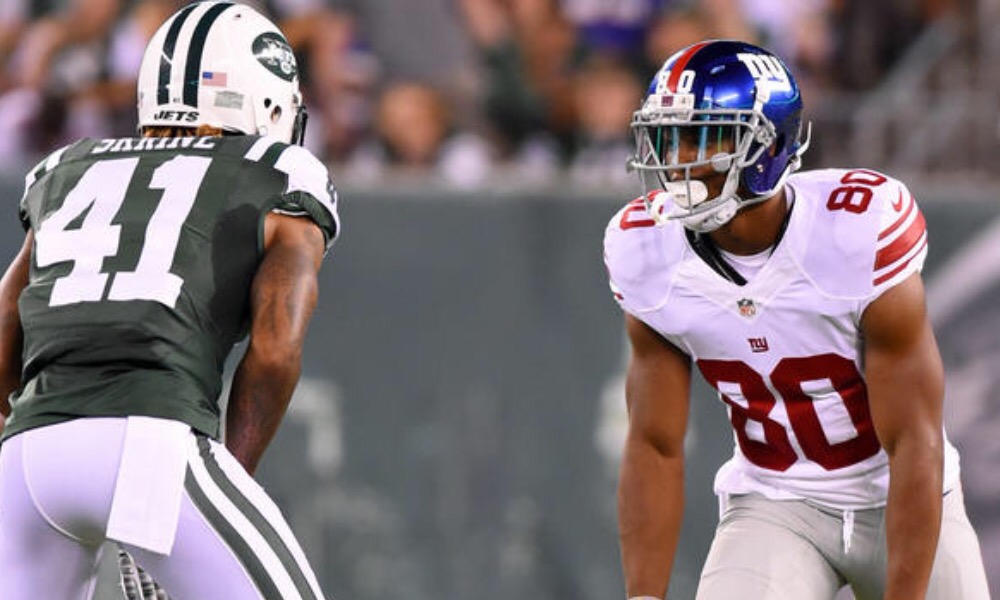 Visions of Victor Cruz wreaking havoc behind a Jets secondary have become a staple in the recent memory of Big Blue’s fan base. The player synonymous with #80 introduced himself to the world wearing #3 during the first week of 2010’s preseason, torching our cross-stadium rival for 3 scores long before he had claimed the Salsa as his own personal touchdown dance. Rex Ryan was left wondering who #3 was, befuddled smile upon his face.

The 7-7 Giants are trailing Rex’s Jets 7-3 with 2:27 left in the first half. 3rd and 11 from our own end zone. Manning stands in the gun, and fires to Cruz on a 10-yard out. A jump cut leaves Antonio Cromartie holding his jock in disbelief while #80 scampers 99-yards, giving the Giants a 10-7 lead, and catapulting us on a six game winning streak that would result in our second Super Bowl triumph in 4 seasons.

Who was the first player to greet Cruz with a celebratory smack of the helmet? Ahmad Bradshaw. The last game changing running back the Giants rostered. A dynamic runner who was a similar threat catching passes out of the backfield. Perhaps Bradshaw was recalling his own 88-yard touchdown in Week 16 of 2007. The Gmen ran for 289 yards in the snow that day; Bradshaw with 181, and Jacobs contributing 143 of his own. The result that season? 19-1, and the first of those two Super Bowl titles.

Jacobs and Bradshaw were both special. Jacobs was the power. A bruising, 6’4” 265 lb. force who thoroughly enjoyed delivering punishment to any defender who dared to try to bring him down. “Earth” as he would become known, was the tone setter. Weakened defenses stood no chance when blitzed by Bradshaw’s speed.

Most importantly, the duo could finish what they started. Whether punching the ball into the end zone with an authoritative jump-spike from Bradshaw, or Jacobs picking up a tough 4th and 1 on a Super Bowl winning drive, these boys could be counted on when the chips were down. The Giants had a running game to lean on when it mattered most, opening up play-action passing for Eli and Company.

A competent offensive line provided the backbone for this reality. Men name Diehl, O’Hara, and Snee were strong, tough, imposing, and united as they created space to operate. Opposing defenses had multiple facets to worry about within the Giants’ offensive game plan. Twas the best of times…

The buzz around the Giants this offseason has been around the receivers. Some have floated the idea that we might have the “best” WR corps in the league, whatever that means. Victor Cruz made his triumphant return Saturday night, against (you guessed it) The New York Jets.

The victory that night is that he appears to have finished a game against live competition without getting injured. Tony Romo’s jealousy knows no bounds. Cruz had one catch for four yards, a baby step in a marathon of a season. Sterling Shepard’s future burns bright, but he’s still just a rookie with limited experience and an unproven skill set.

What we need now.

The Giants need more than a passing game. We need production from the backfield. Are the playmakers present? Rashad Jennings showed flashes last season, the most memorable being a swing pass, a stiff-arm and a 50+ yard jaunt to pay dirt against the Bills. Ultimately he was lost in a 4-man Running back By Committee that wouldn’t have existed had one back inspired Coughlin’s confidence.

Shane Vereen is versatile, with outstanding shiftiness and route running. 3-down back? Not likely. Andre Williams appears to be practice squad fodder with a propensity for coughing up the rock. Bobby Rainey’s most successful career exploits are centered around kick returning, although he does have the longest run of our preseason, a 67-yard explosion against Buffalo.

The answer may be 5th round pick Paul Perkins out of UCLA. His 5’10” 208 lb frame is a mirror image of Bradshaw’s. We all hope he can gallop like Bradshaw through the hole, and breakaway from defenders with game-changing acceleration.

Unfortunately, if Saturday’s performance is an indication, all the talent in the world may be stunted by a putrid offensive line. Failure to seize the point of attack, a lack of toughness, and an undeniable inability to improve on an annual, much less weekly basis is staring us directly in the eye. We cannot ignore the indictment that this has become upon Jerry Reese and our coaching staff. Ernie Accorsi built the previous incarnations of our line, while the current regime stubbornly refuses to allocate the proper resources needed to redefine ourselves in the trenches. Until our offensive line comes together, our offense will not have the opportunity to build confidence and discover their potential.

The hard truth is that the only proven playmakers on our whole offense are Eli Manning, and the gloriously indefensible OBJ. Buckle-up and enjoy the ride Giants fans, we will only go as far as their will takes us.