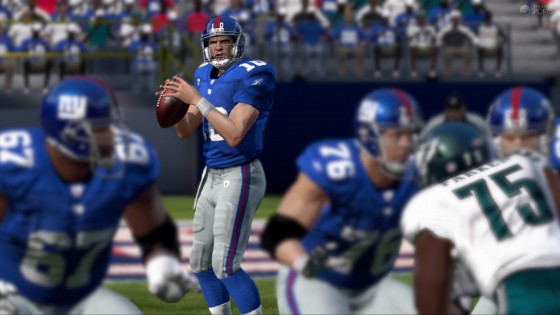 12 months ago, Eli Manning was one of the most disliked quarterbacks in the NFL. Nobody disliked him more than his own Big Blue fans. It’s well known across all sports that New York is one of the hardest places to play. No player is under more media scrutiny and more fan pressure than a New York athlete. But 12 months ago, Eli had already won a Super Bowl against the undefeated New England Patriots and Giants fans still wouldn’t give the guy a break.

3 years earlier, Eli Manning played the greatest game of his life. A year after watching his beloved brother win his first Super Bowl with the Colts, poor Eli was up against the undefeated Patriots. Everyone thought this would be a blood bath. People were planning on a repeat of Super Bowl XXXV, where the Giants were shellacked by the Baltimore Ravens 34-7.
Eli looked like Phil Simms during that post-season. He was accurate, decisive, explosive. In that Super Bowl, Eli went 19 for 34 and threw 2 touchdowns and a pick. All of a sudden, there’s a lot of #10 jerseys walking around New York. A lot of Giants fans were saying things like “I didn’t think he had it in him” or “he sold his soul for that Super Bowl ring”. Everyone seemed content to pat Eli on the back and tussle his hair. Way to go kid.

But why wasn’t he basking in the glory his brother had enjoyed the previous year? Why was the conversation still all about Peyton, Tom and Drew? Eli Manning had just won a Super Bowl, so why was he still hocking watches like the guys on 42nd street while the Holy Trinity were out there on Gatorade commercials or selling underwear or luxury cars?
Eli is a mouth-breather. He has vacant eyes. He always looks lost, dumfounded and confused. He’s got the personality of a wet rag. But he’s got two rings. When he threw a fuss about being drafted by the Chargers and got himself traded to the Giants, I know a ton of Giants fans that were unhappy about that. “If it weren’t for his brother, or if it weren’t for his dad…” “Who does he think he is?” A year after he won his first Super Bowl, it was a fluke of genius – that for the post season he played completely out of character for himself. Two years after he won his first Super Bowl, it’s “he’ll never be like that again.” Three years later, when he was getting all of his passes deflected for interceptions, “he’s a bum!”

Now? “Oh, Eli Manning! He’s the best playoff quarterback of the last 5 years!” I love asking Giants fans about Eli Manning nowadays. You can almost see the crow feathers. Whenever I ask a Giants fan about Eli, there’s always a smirk, like they’re thinking about all of those disparaging things that have been said about poor old Eli over the years. Eli’s only real problem is his inconsistency. He shines in the post season, but his irregular play through 16 games can prevent him from getting there, where can he can silence his naysayers. Even if they’re the ones wearing his jersey.