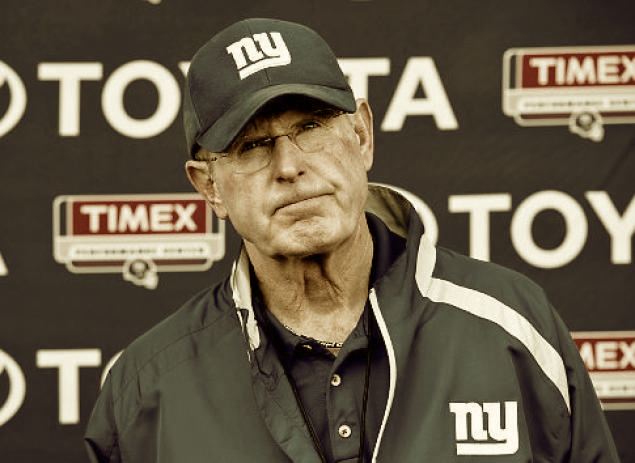 I write this to you with torn emotions.  One side of me arguing how unfair this season has been to you, the other arguing why it is time for you to say goodbye.  What will happen in the off-season is a mystery to all of us Giants fans, and I wanted to take the opportunity to try to express to you how we feel about this unprecedented time in Giants history.  I saw how the criticism of the media in years past took a toll on your family.  While watching “Tom Coughlin: A Football Life” on the NFL Network it was obvious for the first time to me how the stories written about a coach and his future can not only have an impact on him and his team, but his loved ones as well.  Seeing your daughter moved to tears while remembering the media onslaught heading into the 2007 season was heartbreaking, it made me think of my daughter.  No one deserves that Coach, especially not someone who means to us as much as you do.

In this article by Don Banks for SportsIllustrated.com, Don states his case for why it is time for you to “take the high road out of town, and step aside to make room for a fresh set of eyes and ears, which is what the franchise most likely needs now.”

There will be more articles Coach Coughlin, and they will not be written with the same tact that Don Banks wrote his.  Engrained in his words was a respect that very few sports figures are granted, and even fewer deserve.  You are not one of them Coach Coughlin, it is not only your success, but the way you have gone about the last decade that makes this such a difficult situation.

When you came through the door for that first press conference you had us at hello.  No more country clubs with Coach Fassel.  It was  hard-nosed football with Coach Coughlin.  You called injuries “a cancer” and stole my heart when you said confidently, “Discipline is as vital to an athlete as the air he breathes.”

I meet you once Coach Coughlin, it was your very first training camp with our beloved Giants.  A moment that I will never forget, and one I’m sure that you don’t remember.  It was a gorgeous August morning, first day of training camp.  My brother was meeting me in Albany so I made sure I got there early.  Practice started at 9:30, Oops, 9:25, sorry Coach, so I was there promptly by 8am.  I had my coffee and my newspapers handy, so I didn’t mind the waiting at all.  Then Coach, I saw you.  I was standing behind the tacky orange barricades that were put up to prevent the fans from swarming the players at autograph time when practiced ended.  I remember thinking how it wasn’t even like you were walking,  you were bouncing, almost floating.  It was easy to tell from the look in your eye and the swagger in your steps, there was no place else you’d rather be.  You were meant to coach the Giants.  And at that time, you were exactly what we needed.  I remember thinking to myself…”Holy Shit, it’s the General…”, and I probably had thought of a million things I’d shout to you if I got within ear distance, and I went blank, forgot them all.  You were walking straight towards me, and all I could muster up was “Good luck this season Coach, turn this thing around…”.  You smiled, looked up at me and said, “Thank you, It’s a perfect day for some football isn’t it?”.  I remember thinking, “Thank you Mr. Mara, we got our coach!”

It took some time before you were able to turn the tide in your favor.  Some players (Tiki Barber and Jeremy Shockey) resisted your methods.  The media called for your job and second guessed you every chance they had.  Heading into that 2007 season it wasn’t pretty around Big Blue at all.

The hardest thing in life for a person to do is change Coach.  As years go on we become set in our ways, only those with the courage to look in the mirror and to see their own deficiencies have a chance to right the wrongs of their past and become not a better person per say, but a more complete one, at peace with their past and more prepared for an uncertain future.  I don’t know how you did it Coach, but the changes you made to yourself and your outlook on football, to be more understanding, listen more to the voice of the players and show them a different and more personal side of yourself must have been a very difficult thing to do.

Thank you Coach, the changes you made that year impacted not only the Giants organization, but the fan base, and to even a bigger extent, certain individuals on an entirely different level.   I never told this to anyone, but the changes you made impacted me tremendously.  I was in a job I hated and a relationship built on lies and false promises.  Seeing how you changed and impacted the people around you made me look in the mirror Coach.  It helped me to suck up my pride and change for the better of myself and the people I truly loved.  It also made me realize my worth and was why I left that relationship after years of trying to make it work.  Sometimes seeing someone else’s courage can motivate you to do things you could never do on your own.

You and that entire 2007 team changed my perspective on life.  The impossible was now possible, we beat the undefeated Patriots, the future wasn’t foretold, but unfolding before us with unlimited possibilities.  You and that 2007 team showed us dreams do come true.  That we are capable of great things if we believe, work hard and stay positive.  Your change reached way past the white lines of a football field and into our every day lives. You have provided us with memories and moments to last a lifetime.  Your ability to change and your tireless effort to have the players adhere to TEAM, affected people in ways I’m not sure you are aware.  Your ability to change for the better of the people around you helped provided me with the memory of my daughter climbing on my back and screaming in my year when we shocked the world against the undefeated Patriots.  The smile on her face, the glow in her smile when she said “We did it Daddy!”, thank you Coach Coughlin.

Four years later you took us on another magical ride, and gave us another batch of moments we will look back on for years to come.  Whether you know it or not Coach, your actions in adapting to the world around you made us take a step back and realize just how much of an impact one person can make.  You changed the perception of the Giants, you made us proud again.  Your goal a decade ago was to bring back New York Giants Pride, you have accomplished your goal.  We are proud to have taken this ride with you for the last decade, but the waters are once again getting rough, there is a Big Blue Storm on the horizon.

No one knows how you feel Coach. We wonder what your intentions heading into next season maybe.  How long you intend to stay on as coach, and honestly if it is the best thing for both parties involved.

In my humble opinion Coach, with all due respect, it is time for you to say goodbye to us, before we have to say goodbye to you.  This game of football is cruel, and you do not deserve to be pushed out the door.  You have meant to much to us.  No one wants this to get ugly, or the Giants hand to be forced.  Unfortunately, father time stops for no one, and the rebuilding that needs to be done to this team now is a 3-4 year commitment.  This roster is in for a upheaval, and the road ahead is long and full of uncertainty.

What has happened this year is not to be blamed on you, if half the players on this roster had your heart, energy and tenacity we might be talking about the play-offs now instead of the off-season.  It was not meant to be however and as Giants fans, we are forced to wonder what will come next. Whatever happens, the main purpose of this piece was to say, thank you.  We will not, no matter what happens, remember you for this season.  You will be remembered as the man who restored our faith in Big Blue, you gave us “talk is cheap, play the game“…you gave us “All In“…you gave us two rings and memories to one day tell my grandkids about.

You are a Hall of Famer, and arguably one the greatest coaches to ever walk a sideline.  But sometimes Coach, you have to ask yourself,  Is the Juice Worth the Squeeze?

You have given us all you could, and that Coach Coughlin is good enough.  If the desire to Coach is still in you, and we all know it is, there is an opening at West Point with your name on it, the perfect fit for a Coach with your beliefs and your pedigree.  Again, this only my humble opinion, the odds are you will be stalking the Big Blue sidelines again next season are pretty good from what I am reading.  But I urge you to wait.  Wait for this season to be over and take a step back to see the big picture.  You put your pride to the side once before, and this time would be harder for you, because this would be you saying good-bye.

But I leave you with this Coach Coughlin. When you Bleed Big Blue Coach Coughlin, it is never good-bye.  You are now a Giants legend that will stand the test of time.  Leaving us now would not be good-bye, or you quit, but simply, that is time for yet another change for the Ol’ Ball Coach.  Whether that means another sideline, or at home with your lovely wife Judy, your children and your grandchildren is yet to be determined, but as far as we are concerned, you will always be our General.

Thank you Coach… No matter what the future may hold…

PS – If you can play Nassib and make me look like a genius I would really appreciate it.

Happy Holidays to all and to all a good night…