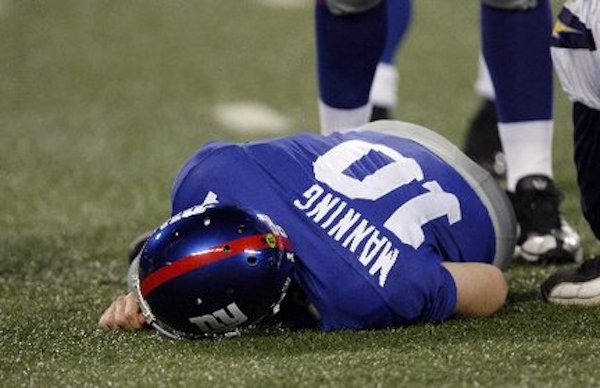 This will not be a long piece at all, but I felt it was necessary after “The Nassib Conundrum“, and how badly it was misinterpreted.

First off, I’m an Eli guy. Love him. I love the quiet confidence, I love the big game demeanor and the ice in his veins. I do not love seeing him get the ever-loving shit beat out him for no good reason at all.

Secondly, I believe the Giants should give Eli an extension (as long as it makes sense financially) that will make Eli a Giant until he takes his last snap from under center.

Third, Eli should be benched for the last 3 games of the season.

NASSIB …Not cause Eli should be benched, but so Eli doesn’t get killed. Where is the Wu-Tang Clan when you need them? Hey Eli, Protect Ya Neck…

I don’t want to hear he needs time with his wide outs, or you don’t bench him cause he’s a Super Bowl MVP or Coughlin saying this is our team, none of it. Enough. We sound ridiculous.

Eli is getting killed out there. He looks like the QB from the movie “Necessary Roughness” running around after the snap yelling “Blow

the whistle, blow the whistle.” The shots he is taking are coming from the front side, up the middle and the blind side. He got hit once in San Diego from the blind side and I do not have a clue how he got up. He is one tough son of a bitch.

He has all off-season and pre-season to work with the wide receivers. I’d rather him be healthy.

But he’s a 2 time Super Bowl MVP James. Yeah I know, and that is exactly why he is too valuable to be left in these games with receivers who are making him hold onto the ball to long due to running the wrong routes and because this offensive line is tragic.

Coughlin will say…”There is not much we can do, our team is our team.”

And I reply Bullshit!!! Yes this is your team this year, but it will not be the same “not ready for primetime players” that have shamed the Giants uniforms all season long.

Maybe benching Eli sends a message throughout the locker room. Maybe it says we are beginning the process of evaluating every position for next year. Shape up or get out. Maybe benching Eli makes those lineman look at each other and say “Wow, we must be bad if they benched the franchise QB cause we are inept in all areas and going to get him killed.”

But what about his consecutive game streak? That is a nice story for individual players. The Giants as a franchise can not worry about trivial things like streaks and individual achievements. We have an entire team to rebuild.

How does playing Nassib help us rebuild James? Because in order to rebuild you need picks in the draft. Is trading Nassib a definite if he plays for the last 3 games?…No. What is definite is you don’t know what you would get for him without playing him.

Look what is going on in Washington….Yes they benched RGKnee because of all his bullshit and him being a diva and all of the above…but check out this quote from Shanahan…

On what will happen moving into the offseason if Kirk Cousins plays well in the next three games:
“Well that’s the problem that you want to have. You want to have everybody playing good. We made a decision a long time ago that Robert is our quarterback. He’s our quarterback of the future. We made this decision based on what we think is best for him and it could be the best for our organization. If he (Kirk Cousins) lights it up, we’ve got a lot of options with Kirk. I hope that’s what happens.”
#Foresight #PlayNassib #EliProtectYaNeck
Eli is our QB, most likely for another 6 or 7 seasons. He has been healthy for his whole career, he is the face of franchise, and throwing him out there when he has been pummeled all year-long, in my eyes, is irresponsible.
Eli should be a Giant for life. Nassib most likely is not.
Eli has been sacked more times through 14 games this season than any other entire season in his career. Hold on read that again…Eli has been sacked more times through 14 games this season than any other entire season in his career. Let that sink in…then realize he has Seattle and Detroit coming up, and both teams are playing for something and will go after him with all they have. Someone, please, blind fold me.
This season has been the ugliest one I can remember in all my years as a Giants fan…and it could get worse.
Mark my words and you heard it here first. Kirk Cousins is going to be trading for picks. Teams are desperate for QB’s with potential that don’t cost a lot of money. The Redskins for all their woes recognize that, and they are doing their best to put Cousins on display for the league to see. They need players, not back up QB’s and the Redskins like the Giants have their QB for the next 5-10 years in place. But RGKnee needs help…So does Eli.
Would you rather an extra 2nd ,3rd or 4th round pick next year?…Or Nassib on your bench?
Desperate times call for desperate measures…some times being to full of pride can hurt more than help. Coughlin and Reese should recognize that, and instead of making excuses for not playing Nassib they should move heaven and earth to make sure it does happen, with the future of Eli and the Giants in mind.
The Seahawks and the Lions… Someone get Eli a suit of armor.
Hey Eli Protect Ya Neck!!!