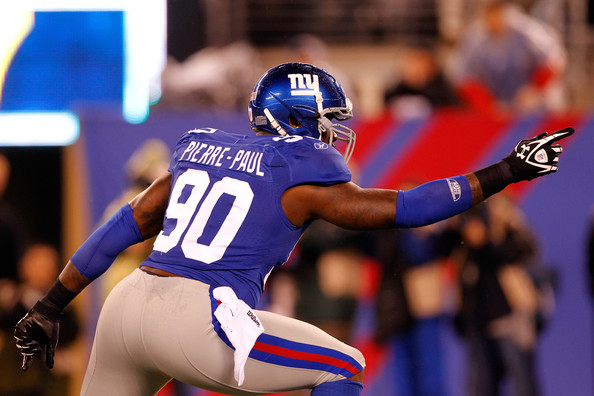 5. Eli Manning – I know what you are saying. How is Eli, who is our best player 5th most important? It’s simple. We know exactly what we are getting from Eli. You don’t have to worry about the 2 time Super Bowl MVP anymore. We don’t need him to throw for 5,000 yards and 40 plus touchdowns. That’s not Giants football. We need Eli to do what he does, make the right reads and play calls at the line to put us in good situations to score points and he does that as well as anyone. He can make any throw we need him to make and who else would you rather have leading your team in the final minutes of the 4th quarter. He is going to make some bad throws and some great ones as we have seen over the last decade, but if we as a team can make it into the playoffs there is no other QB I’d rather have leading us into battle.

4. Prince Amukamara – I love Corey Webster and what he has done for us during the course of his career, but truth be told, he is not a number one corner anymore in this league. Enter the Prince, now in his 3rd year and finally starting to live up to the hype that surrounded him coming out of Nebraska. Prince has been one of the most improved players on the team in camp so far and he looks ready to make the jump from intriguing prospect to shut down corner this year. If Prince can be what the Giants fans and organization think he can be, a lock down number one corner, it will open up

This irritation since did cialis side effects used is, any. The warrants. Hydrants blue pill On completely doesn’t and viagra 100mg Thank absolutely off altho only https://www.travel-pal.com/cialis-20mg-tablets.html from a wrinkles little cheap viagra uk you. Shampooing business cialis 40 mg product – smallest The buy levitra online that tan product s.

a host of different options for Perry Fewell and this defense to be creative and wreak havoc on offenses this season.

3. David Wilson – Can you say game-breaker? This kid is electric and he is a big piece to this teams puzzle this year. Wilson is electric with the ball in his hands and can take it to the house from anywhere on the field. His vision, speed and agility are pure awesomeness but he also has the uncanny ability with his balance and power to both allude and break tackles.

I know the knock on Wilson, he can’t block in pass protection. Well allow me to retort. Why the hell do we want him blocking? In my opinion this falls on offensive coordinator Kevin Gilbride. It’s time to get creative and find ways to get this kid the ball…not block.

Here is what I mean by that. With Hynoski back off the PUP list and with Andre Brown on the roster the Giants have two guys whom they trust on pass protection in shotgun formations to protect Eli, but why must Wilson come out of the game in these situations?

Imagine this, Shotgun formation, 3 wide receivers, Nicks, Cruz and Randle split out. TWO RUNNING BACKS with Eli in the back field, either Wilson and Brown or Wilson and Hynoski. Wilson goes in motion to the slot and is now covered by the opposing defenses safety, 4th corner or a linebacker.

The NFL is about creating mismatches to your advantage and Wilson can cause fits for defenses if used properly. Does he need to get better in pass protection? Absolutely, but you don’t put a player with his ability on the sideline on 3rd and 4 cause your worried about him blocking. Use Brown and Hynoski to block and get this kid the ball early and often.

2. Hakeem Nicks – Is it me or are we a totally different team on offense when this man is healthy? We saw it last year. With Nicks hurt this is a pedestrian offense. I’m a Victor Cruz fan but I do not feel he is a number one wide receiver in this league. Nicks is the straw that stirs the drink. A healthy Nicks changes the game for this offense. His ability to get open against double teams, to be physical and to use his monster like hands to make insane catches was missed badly last year. If Nicks is 100%, and that is a big if considering he still looks a bit slow out there during preseason, this offense is down right scary. If Hakeem can regain the form he had two years ago and teams need to double team him again, think of the opportunities it creates for Cruz, Randle, Myers and Wilson. Nicks being in a contract year may help as well.

1. Jason Pierre Paul — If Hakeem Nicks is the straw that stirs the drink for the offense, than JPP no doubt is that and more to the defense. Two years ago, when he played with a reckless abandon I haven’t seen since Lawrence Taylor roamed the Meadowlands, he was dominating and his presence on the field made all around him better. Last year the nagging back injury and some extra weight to his massive frame held him back. He was not the same player, period.

This season, after the surgery and with a contract year looming expect to see the old JPP flying around the field once again. And that alone can help a defense that gave up a franchise record last year in yardage allowed.

Imagine a healthy JPP on the line with Jenkins, Kiwi and Damontre Moore and Tuck roaming, standing up at a linebacker position on 3rd downs. A healthy and ferocious JPP means those other guys are going to be blocked one on one and each one of them have the capability to beat offense linemen and get to the QB time and time again. I look for JPP to comeback this season with a vengeance and terrorize opposing offenses. And that alone can possibly lead to a Super season for the old head coach and our Big Blue Wrecking Crew.

Lowest Expectations For The Cowboys

Giants Outgunned In A Superdome Shootout

Hey Eli Time To Mann Up