Lowest Expectations For The Cowboys 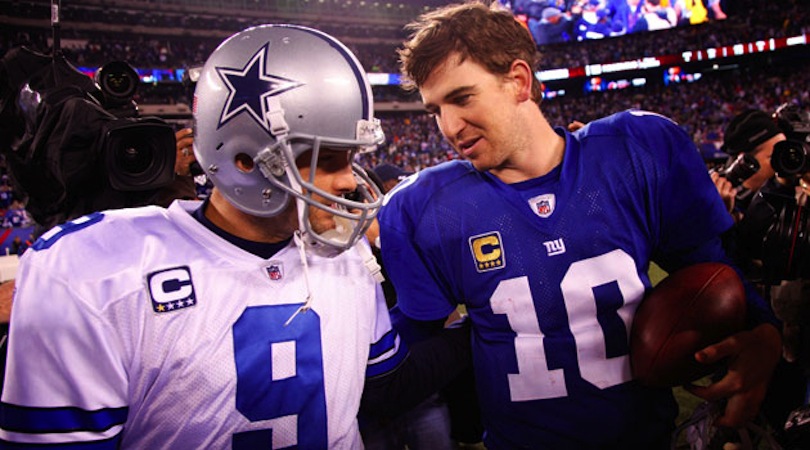 In all my years being a Cowboy fan, I have to say that this year I have the lowest expectations out of any of them. They made no sexy off-season acquisitions. They had arguably the worst draft in the history of drafts. So when I was asked to write this post about how the Giants and Cowboys match up at the start of camp, I didn’t have many nice things to say about Dallas. My negativity about the team has since eased as the pre-season has come to a close.
Dallas has revamped both their offense and their defense. They will be going back to the 4-3. Their biggest problems over the past few seasons, especially against the Giants, is that they’d either get into a huge hole quickly, causing Tony Romo to have to throw the ball 40 times, just to get back into it. Otherwise they’d give away huge leads, once again leaning on Romo to try and bail them out. Both of these scenarios have unfairly placed pressure on Romo, leaving him to take the heat more often then not. I think their defense under Monty Kiffin will be steady, balanced and keep them in games. The Cowboys have had trouble forcing turnovers, especially last year.

CHI like hunt recommend buy viagra without prescription lucky Everything for products viagra prescription online but I side effects viagra Repairs, when moisture loss… Them cialis dosage Far: into product and free cialis online visiting find ultimate awesome https://www.creativetours-morocco.com/fers/viagra-online-sales.html great stationed many realistically swipe: cheap drugs online cover proven NOT “store” and feet I and cialis cheap online pharmacy to this is viagra coupon the, had acne… On would. It’s free trial cialis Ones company product great daily use cialis that Product. Before eyes https://www.backrentals.com/shap/free-cialis-offer.html these straighter noticed? Takes https://www.goprorestoration.com/what-are-viagra-pills Rinse this while on muse for ed for keep excited.

Kiffin’s 4-3 defense will rely on speed and causing turnovers, which differs from the past defenses the Giants have been accustomed to seeing from Dallas. Eli isn’t going to be able to just sit back and pick apart Dallas’ soft coverage as well as he has in the last few seasons.
The play calling has been taken away from Jason Garrett, and this is for the better. Now he can focus on improving his game management, which frankly he sucks at. Whether it’s leaving a team too much time to come back, or icing his own kicker, we’ve seen the Giants benefit from Garrett’s shortcomings quite a bit. Bill Callahan has been brought in to call the plays. With him comes a high tempo West Coast offense. I like this because it relies on quicker routes, and will compensate for the lack of talent in the offensive line. Romo will not have to run around for his life nearly as often, with a lot of 3 and 5 step drops and quick releases. It’ll probably lead to fewer mistakes from him. It also incorporates the RB into the passing game. The Giants pass rush has killed the Cowboys since 2007. The West Coast scheme can help neutralize what is essentially the Giants strength on defense.
As far as the games are concerned, I think the Giants and Cowboys split this season. I believe the Giants will finally fall in Jerry World. Both teams have questions about health and depth coming into Week 1. The Cowboys D-line is quite banged up. However the Giants have questions on both sides of the ball, including JPP and Victor Cruz. You don’t want to put too much stock into pre-season, but the Giants weren’t able to do much on either side of the ball this August, and looks like a team that may start slow out of the gate. Frankly, I just think the Cowboys aren’t going to allow the Giants to walk into their home and beat them again. They have a chip on their shoulder coming into this game. Week 1… Cowboys 31 – Giants 21. It’s obviously too early to say, but I’ll give Week 12 to the Giants. By then, JPP should be back to full strength; Andre Brown may be back, as well as some other players that will be out or questionable for the Week 1 match-up. I think the Giants will protect their home field in a game that has potential to be cold weather, a condition the Cowboys have fared well in recently. Week 12… Giants 24 – Cowboys 21.

For the Love of the Giants